What Employers Should Know About Marijuana in Canada 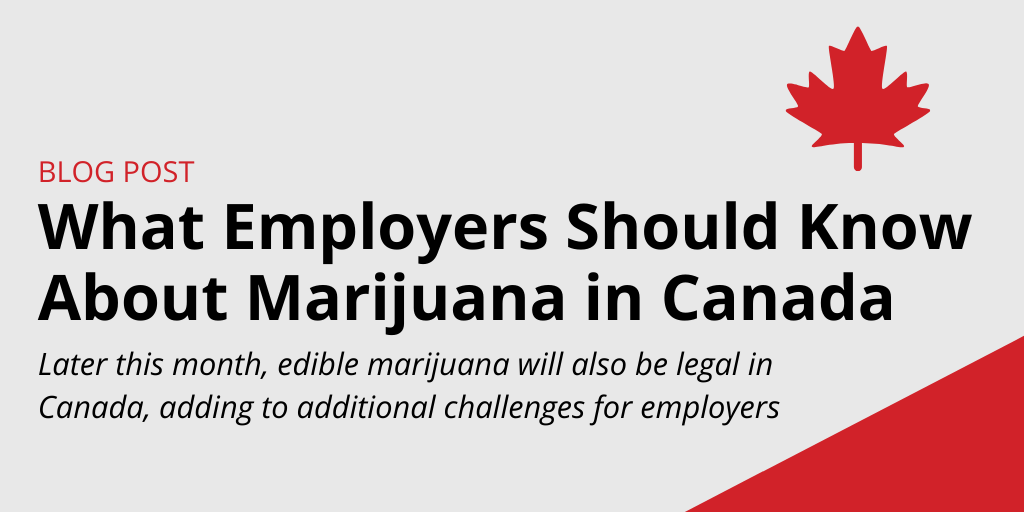 Later this month, edible marijuana will also be legal in Canada, which will likely lead to additional challenges for employers.

It’s been a little more than a year since Canada legalized the recreational use of marijuana, with edible products becoming legal later this month. If you’re an employer with workers north of the border, here are a few things you should know about marijuana use and the workplace in Canada.

Unlike the U.S., where marijuana remains illegal at the federal level, Canada legalized the recreational use of marijuana nationwide starting in October 2018. (Medical marijuana is also legal there.)

In the spring of 2019, the Canadian government amended regulations of the Cannabis Act to allow the sale of edibles, extracts and topicals. These will be available in mid-December, adding another layer of complexity for employers.

Meanwhile, each province and territory in Canada has its own regulations for weed, including the legal age of use, where people can buy and use it, and how much they can have.

Workplace Impairment and ‘Duty to Accommodate’

Much like the laws of U.S. states where marijuana is legal, employers in Canada can prohibit the use of marijuana in the workplace.

However, under Canada’s human rights legislation, employers have a so-called “duty to accommodate.” That means companies must “accommodate to the point of undue hardship” a worker who uses marijuana due to disease, injury or disability. (Even if an employee has a prescription for medical marijuana, it does not preclude an employer from prohibiting its use in the workplace. But accommodations must be made for such workers.)

The Canadian government outlines employers’ responsibilities related to workplace safety and encourages the implementation of policies on substance abuse and impairment.

Generally, random drug testing is banned in Canada. But there are circumstances under which it is allowed, safety-related professions or airline pilots, for example.

Meanwhile, pre-employment drug testing is allowed in Canada if the job is “safety-sensitive,” which implies a position in which impairment could result in a “catastrophic incident” and impact others. Still, a failed or refused test is not necessarily grounds for a withdrawn job offer.

Because of the lack of smell associated with these products (compared with smoked marijuana) they can be harder to monitor in the workplace. The nature of them — cookies, gummy candy, etc. — also makes it more difficult for employers to monitor.

Note that edible marijuana takes longer for the effects to kick in, meaning the risk of over-use or sudden impairment is more prevalent.

Some suggest training supervisors for signs of impairment and how and when to take disciplinary action. Again, establishing company policy regarding marijuana usage is always a good idea for employers with workers in Canada.

Despite the legalization of marijuana, Canadian authorities stress workplace safety responsibility for both employers and employees. Establishing policies and training should be the first steps for employers.

In the U.S., where marijuana legalization is spreading across the country, the laws vary more widely. The presence of weed in a pre-employment drug screening may not be enough to refuse to hire someone in certain jurisdictions.

As always, it’s up to employers to understand the laws where they have workers and remain compliant with local regulations.