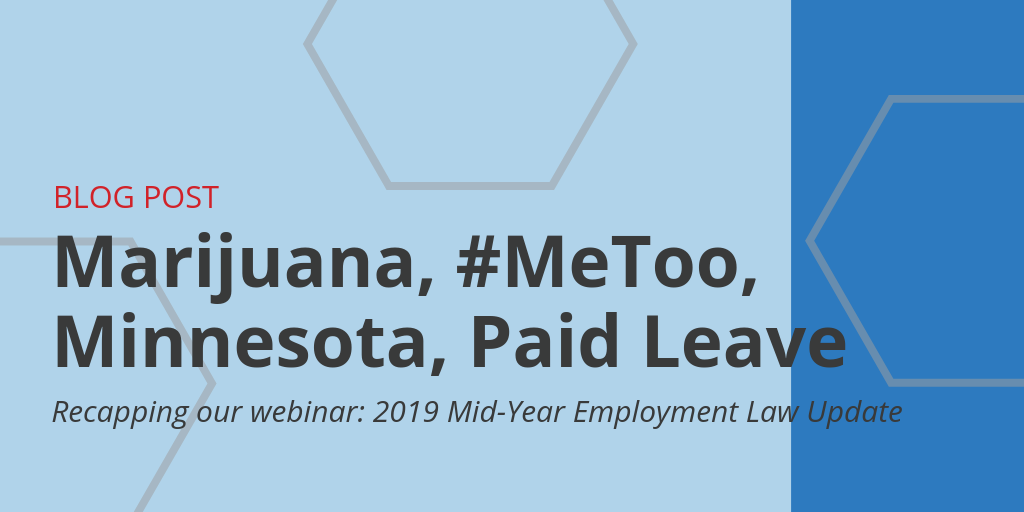 Do you need a comprehensive rundown of major employment law trends from the first half of 2019? GovDocs has you covered.

Our own Jana Bjorklund — Director of Employment Law and Product Senior Counsel — recently provided an overview of the critical employment laws enacted in the first half of 2019. All of which employers should have on their radar.

Let’s look at the topics she examined and few takeaways from each. 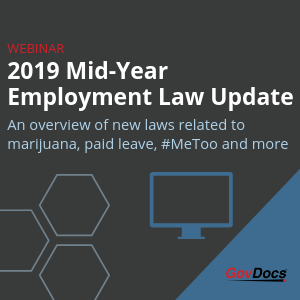 Marijuana Use Under Current Employment Laws

While 33 states allow medical marijuana and 11 have legalized recreational pot, statutes and case law varies from state to state. Bjorklund noted the employment law differences in four places where recent laws/court decisions have had an impact on employers:

This June, Nevada became the first state in the nation to make it unlawful for a company to refuse to hire someone based on the presence of marijuana in pre-employment drug screenings.

The law contains the typical exemptions for public safety officials or drivers. But there is also language about workers who “in the determination of the employer, could adversely affect the safety of others.” It will be interesting to see how the courts interpret this clause once the law goes into effect next year, Bjorklund said.

Meanwhile, in New York City, marijuana usage is expected to be treated like alcohol when it comes to pre-employment drug tests. However, because pot stays in your system longer than alcohol, it could pose challenges for employers. With several exceptions based on the type of work, the ordinance goes into effect May 10, 2020.

In July, New Jersey made amendments to its medical marijuana law, effective immediately.

In the Garden State, employees are now protected from retaliation if they are a registered medical marijuana user. Also, employers must give notice of workers’ rights, and employees have three days to provide a legitimate medical explanation for the presence of marijuana in a screening.

Lastly, Illinois will soon add marijuana to a list of legal substances employees may use during off-hours.

Going into effect Jan. 1, 2020, the law also says businesses cannot discriminate against employees based solely on use. The catch is there is a provision about impairment at work. And “impairment” is always a gray area, Bjorklund said. An employer can’t discriminate based on a positive test without having witnessed impairment in the workplace.

Ultimately, employers need to keep up with marijuana laws in various jurisdictions and how they apply to workers’ rights.

The Latest on Paid Leave

The expansion of paid leave laws, as well as their many different forms, has presented challenges for employers.

“I don’t think I’ve met someone who doesn’t struggle with this,” Bjorklund said.

Generally, there are three categories of paid leave laws at the state, county and city levels:

Each jurisdiction has its own paid leave rules— how it’s funded, what qualifies as a legitimate reason for time off, etc.

Bjorklund gave an overview of:

Check out the webinar for a full breakdown.

Instead of seeing headlines on harassment cases, the news on #MeToo has turned to employment law, Bjorklund said. The resulting legislation includes:

Bjorklund focused her attention on updates to nondisclosure agreements in New York, Oregon and California. These states are typically at the forefront of changing employment law.

Employers need to be aware of these updated laws, where even a “stray remark” could result in a complaint being filed, Bjorklund said.

There are, of course, more details when it comes to these laws. Be sure to view the webinar for a full breakdown.

The U.S. Department of Labor over the past six months has issued three opinion letters on Fair Labor Standards Act compliance.

Bjorklund, in the webinar, examines each in detail. But broadly speaking, DOL opinion letters have resulted in the following changes.

Hours rounding: Practices are permissible as long as they appear to be neutral.

Paralegals’ status: Can be classified as exempt based on pay and the “independent judgement” factor.

Bonuses and overtime: If a bonus paid is not tied to straight time or overtime hours, then the employer must recalculate the regular rate of pay for each workweek within the bonus period and pay overtime compensation due for the bonus period.

Lastly, Bjorklund discussed the new wage theft law in Minnesota, considered to be among the nation’s most stringent.

With broad recordkeeping requirements and harsh penalties for offenders, criminal provisions in the law are now in effect.

Check out our blog for further details: Minnesota Enacts One of Nation’s Strongest Wage Theft Laws.

There’s no slowing down the train of employment law updates.

Whether it be creation of new laws, additional protections in existing legislation or DOL clarifications, employers must stay abreast of the latest changes.

What Did Democrats Say About Minimum Wage at the Debates?
Scroll to top