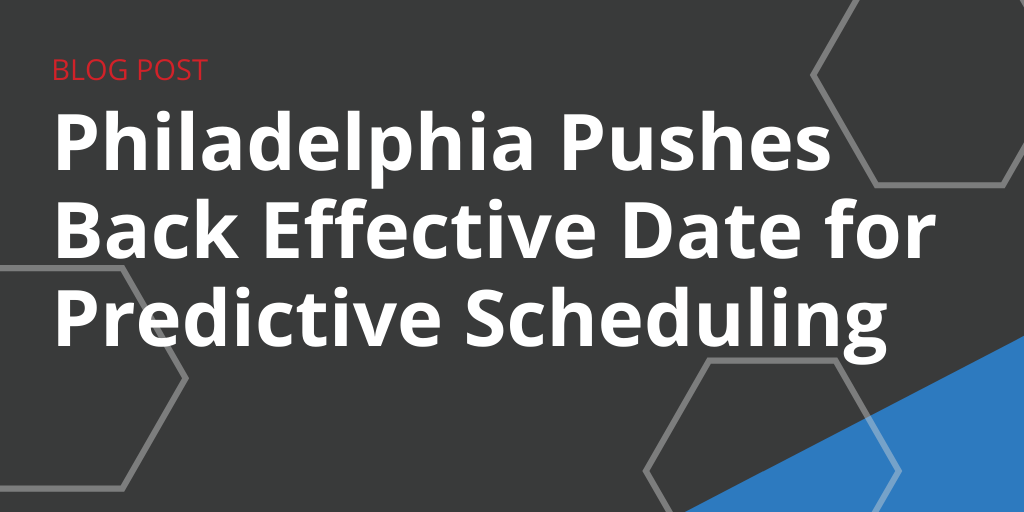 The effective date of the Philadelphia Fair Workweek Employment Standards Ordinance was initially set for Jan. 1, 2020.

Employers in Philadelphia have more time to prepare for the city’s predictive scheduling ordinance, which has been delayed until April 1, 2020.

The effective date of the Philadelphia Fair Workweek Employment Standards Ordinance was initially set for Jan. 1, 2020. But due to “the short amount of time between the anticipated posting of final regulations” and the original effective date, it was pushed back, according to the city.

In December 2018, the city approved the ordinance, which will require employers in certain industries to give workers advance notice of their schedules, among other measures.

The city held an open comment period from Oct. 4 to Nov. 4, and the Mayor’s Office of Labor is now developing a report to address those concerns. That report is expected to be completed later this month.

The ordinance applies to companies in the retail, food and hospitality industries with 30 or more locations nationwide (including franchises and chains) and 250-plus employees, which includes part-timers.

Among other items, the ordinance requires:

The ordinance does not cover independent contractors, and employees covered by a collective bargaining agreement may waive the requirements.

Meanwhile, violations of the law can result in fines against employers.

In 2017, Oregon became the first state to pass a predictive scheduling law, with cities now following the lead.

With the arrival of the holiday season, employers may be taking on additional workers and should check whether they are following local predictive scheduling laws. While Philadelphia’s is on hold for now, these cities also have ordinances on the books:

Also note that Chicago recently passed its own predictive scheduling ordinance, but it won’t go into effect until July 1, 2020.

On the other end of the spectrum, some states have passed laws banning cities from passing such laws:

While Philadelphia employers won’t have to worry about predictive scheduling starting in 2020, other employment laws across the country will go into effect Jan. 1.

From minimum wage increases to paid leave laws and others, the world of employment law continues to shift and evolve. Companies would be wise to review all local laws where they have workers.