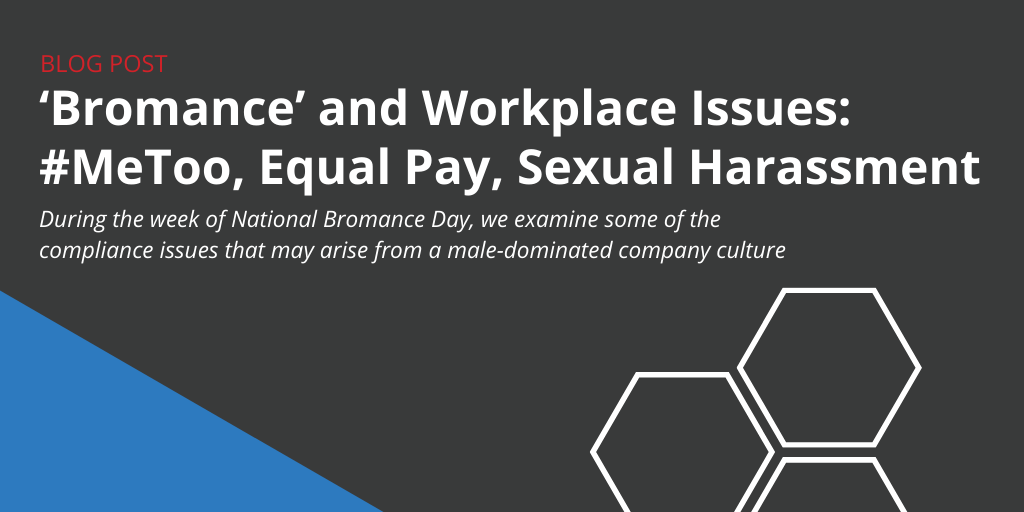 During the week of National Bromance Day, we examine some of the compliance issues that may arise from a male-dominated company culture.

National Bromance Day was July 21. And while general camaraderie on the job can be a good thing, the old boys club sometimes can spell trouble when it comes to bromance in the workplace.

Executive boards across the country are generally male-dominated, and the gender gap typically increases at higher levels of management. Plus, women are more than twice as likely to report that their gender makes it more difficult for them to succeed at their job.

With that in mind, we’ll examine some of the issues that can arise when a company’s culture eschews a level playing field for one geared toward men.

Of course, the most obvious of employment laws that could become a problem under a male-centric workplace is sexual harassment.

In 2019, less than 17 percent of sexual harassment charges tracked by the Equal Employment Opportunity Commission were from men. That figure has held relatively steady since 2010.

Despite federal laws protecting people against sexual harassment in the workplace, many states have stepped in with additional measures in recent years, including:

These measures demonstrate how lawmakers are approaching sexual harassment in the workplace during the #MeToo era.

Another of the major employment law development stemming from the #MeToo movement has been the rise of equal pay legislation.

Generally, these laws prohibit employers from paying employees less on the basis of race or sex. Some also include elements that ensure companies cannot limit employment opportunities based on sex or gender identity, as is the case in Maryland, which added new civil penalties to its equal pay law last year.

More than 40 states in the U.S. have equal pay laws on the books.

In addition to the more prominent employment law issues mentioned above, there are other items employers should consider.

Some states, including California and Maryland, have passed laws trying to increase the number of women on the executive boards of large companies.

Meanwhile, states have also pushed to expand protected categories by prohibiting discrimination employment on the basis of sexual orientation and gender identity. Virginia passed legislation this year. North Carolina and Denver have updated their laws, too.

Despite our somewhat cheeky title, bromance in the workplace can lead to discriminatory practices, intended or not.

Employers should stay up to date on the latest laws and developments, not only to ensure a safe and equitable workplace, but also to maintain a strong reputation as a company.