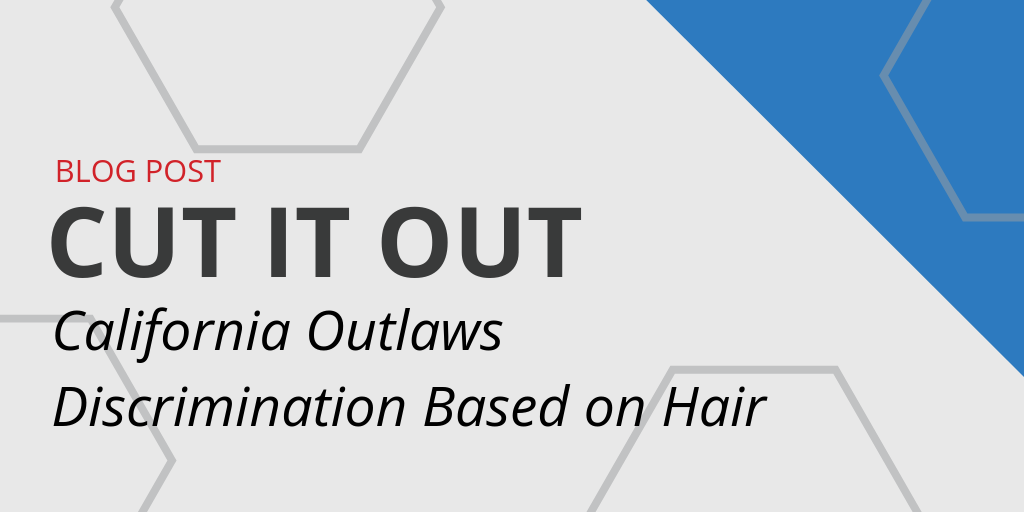 For employers, the new California law means discriminating against a worker, or potential employee, based on hair is prohibited unless a security or “bona fide occupational qualification” reason exists.

Not hiring because of hair? Cut it out in California. The Golden State earlier this month became the first state in the U.S. to make it unlawful to discriminate against someone due to their hairstyle.

The CROWN Act (Creating a Respectful and Open Workplace for Natural hair) is specifically aimed at “natural” hair typically associated with African Americans:

“In a society in which hair has historically been one of many determining factors of a person’s race, and whether they were a second-class citizen, hair today remains a proxy for race,” reads a portion of the bill. “Therefore, hair discrimination targeting hairstyles associated with race is racial discrimination.”

The legislation amended California’s Fair Employment and Housing Act and applies to housing as well as employment. For employers, that means discriminating against a worker, or potential employee, based on hair is prohibited unless a security or “bona fide occupational qualification” reason exists.

Chelsea Johnson, a sociologist who has researched the natural hair movement, told Los Angeles Magazine that certain hairstyles are a true impediment in the workplace.

“These stigmas and associations have persisted through slavery, Jim Crow, and to the present day,” Johnson said. “Associations between kinky hair and wildness, craziness, and dirtiness become barriers, especially for women of color working in professional and service sectors here in Los Angeles, across the country, and in many parts of the world with similar histories of colonization and slavery.”

While California was the first state to ban discrimination against natural hair, New York State passed a “protective hairstyles” bill in July.

“Discriminating against someone because of their hair style or texture is wrong, and now it is also against the law,” Senate Majority Leader Andrea Stewart-Cousins said in a statement. “We should celebrate the diversity that makes New York State great and that includes respecting the hair style choices of all New Yorkers. I commend Senator Jamaal Bailey for sponsoring this legislation which the Senate Majority was proud to pass, and I thank Governor Cuomo for signing it into law.”

Meanwhile, New York City in February provided official guidance related to natural hair styles. The Big Apple’s language is broader and extends to the use of dye and extensions, and grooming policies.

Finally, in New Jersey — where a high school wrestler was forced to cut off his dreadlocks before a match in December 2018 — lawmakers are also considering a hair discrimination bill.

Dove beauty company has been a proponent of such legislation, co-founding the CROWN Coalition.

In May it released the results of a survey of 2,000 women. It found that black women are 80 percent more likely to alter their natural hair to conform to work expectations or societal norms. Black women are also more likely to be sent home from their job because of their hair, the survey said.

Across the country, lawsuits have been filed against companies and school districts alleging discrimination based on hair. Now, legislators and policymakers are stepping in.

For HR and compliance teams, educating hiring officials about these new laws will be part of the growing complexity of employment law.