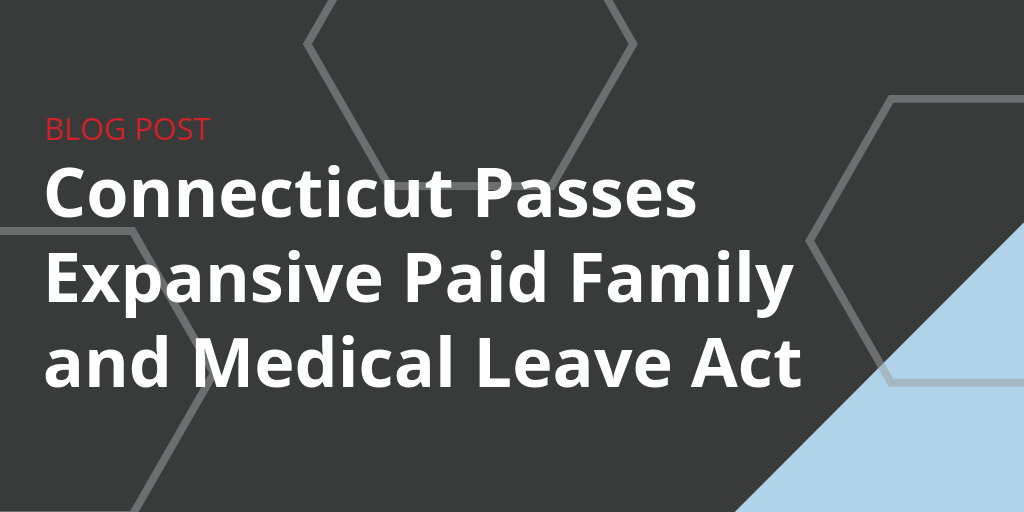 According to the Connecticut governor’s office, 13 percent of private sector workers in the U.S. have access to paid family leave, and 25 percent of mothers return to work within two weeks of giving birth.

Connecticut last month became the seventh state in the U.S. to enact a paid family and medical leave act. Signed into law June 25, the measure updated Connecticut’s previous legislation and is considered among the nation’s most expansive paid medical leave bills.

The amount employees will be eligible for under Connecticut’s Paid Family and Medical Leave Act is tied to the state’s minimum wage. (Connecticut in May passed a bill that will increase its minimum wage annually until it reaches to $15 an hour in 2023.)

How FMLA Works in Connecticut

The weekly benefit for Connecticut employees, beginning Jan. 1, 2022, will be:

Employees will pay for the time off through a 0.5 percent payroll tax. Companies with one or more employees must provide PFML. Specifics of the bill include:

Including taking time to care for themselves, Connecticut employees can use the time for four additional reasons:

According to the Connecticut governor’s office, 13 percent of private sector workers in the U.S. have access to paid family leave, and 25 percent of mothers return to work within two weeks of giving birth.

“Supporting the working families of our state will strengthen our economic footing and make Connecticut a stronger place to live, work, and do business,” Gov. Ned Lamont said. “Adopting this program means that workers who need to take time off for a new baby or recover from illness are not punished financially, and businesses do not risk losing good workers during those emergencies. Regardless of whether a public or private entity administers this program, there will be no profit motive to deny any applicant. We know working families are the backbone of our state. If they are not financially stable, Connecticut will never be.”

Connecticut is the latest in a growing number of jurisdictions to pass bills related to paid leave.

However, some of these laws at the city level have been challenged in the courts, most notably in the Texas cities of San Antonio and Austin. Such action in the courts adds yet another level of complexity to tracking paid leave laws.

Employers who have workers in Connecticut must prepare to give notice to employees and be aware of the January deadlines in 2020 and 2021.