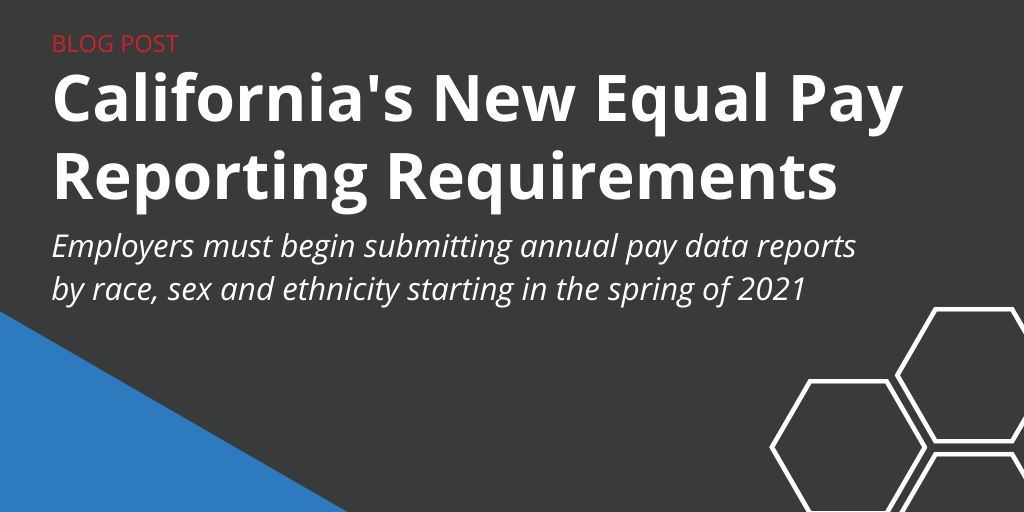 With the legislation taking effect Jan. 1, 2021, the first annual pay data reports from employers are due March 31, 2021. Subsequent reports will also be due on March 31 each year.

California employers will have another layer of compliance on their hands next year following new equal pay reporting requirements that were signed into law this fall.

Pay data will have to be reported to the state from any private employer with 100 or more workers. California Gov. Davin Newsom signed the bill Sept. 30.

With the legislation taking effect Jan. 1, 2021, the first annual pay data reports from employers are due March 31, 2021. Subsequent reports will also be due on March 31 each year.

First, the pay data reports must include information on the number of employees by sex, ethnicity and race in these job categories:

Second, employers must also count — again, by sex, ethnicity and race — workers whose annual earnings fall within each of the pay bands used by the U.S. Bureau of Labor Statistics in the Occupational Employment Statistics survey.

The law authorizes California’s Department of Fair Employment and Housing (DFEH) to investigate and prosecute complaints about unlawful wage practices.

For employers, these reports can be a “snapshot” of any pay period between Oct. 1 and Dec. 31. Companies with multiple establishments must create reports for each location.

Meanwhile, employers already completing an Employer Information Report (EEO-1) can submit a copy of it containing the required California information to be compliant.

Lastly, these reports must be presented in a format that can be accessed and searched through “readily available software,” according to the legislation.

Signed into law in 2015, the California Equal Pay Act initially prohibited employers from paying workers less than employees of the opposite sex for equal work.

The law has been strengthened several times since then. At a high level, the significant changes in recent years include:

Meanwhile, the new reporting law in California specifically references the state’s gender pay gap, which results in “billions of dollars in lost wages for women each year in California.” It also notes hidden pay inequities and the Trump Administration’s decision to do away with such reporting under federal reporting rules.

California in 2019 created a #EqualPayCA initiative aimed at further reducing the pay gap, connecting residents to resources, roundtables and more.

While California has long been a leader in progressive employment laws, the #MeToo Movement has sparked a cascade of new laws across the U.S.

In addition to equal pay laws, states have implemented new sexual harassment training requirements and lowered thresholds for establishing claims. Also, as is the case in California, salary history bans have been enacted in other jurisdictions.

While the COVID-19 pandemic and new paid leave laws have garnered much of the attention in recent months, new laws related to #MeToo may come to light in the years ahead.

More Stories From Employment Law News
Legalized Recreational Marijuana on the 2020 Ballot: What Employers Need to...