The #MeToo Movement: Where We Are Today 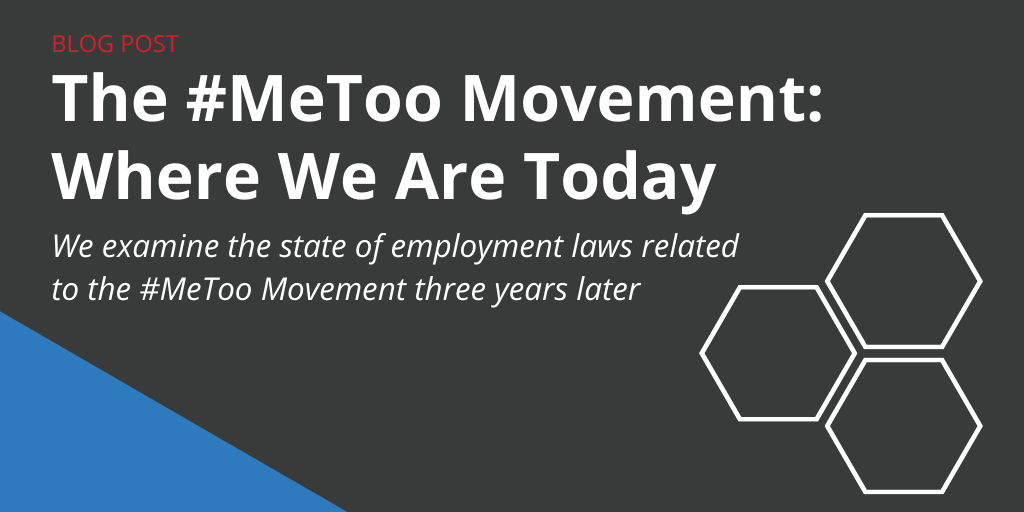 The #MeToo Movement has evolved from a hashtag about sexual assault to a rallying cry for changes to workplace employment law. Years after the advent of #MeToo, where are we today?

Impacts of the hashtag, which gained prominence following sexual assault allegations against a Hollywood movie producer in 2017, have reverberated across the U.S., as lawmakers have responded to the movement to make substantive changes to employment law.

Legislative responses to #MeToo can take many forms, including:

Employers must be cognizant of these new laws, as well as increased attention to workplace conduct, where a stray remark could result in lawsuits and negative headlines.

Three years after the October 2017 suggestion that women add #MeToo to hashtags about their sexual harassment or assault incidents, we will examine the influence the movement has had on employment law.

Foremost among the laws that have arisen as a result of #MeToo pertain to harassment training.

Since the onset of #MeToo, seven states, along with New York City, have passed laws requiring harassment-prevention training:

Each has their own regulations regarding how these laws must be followed. These include:

Some jurisdictions require training of all employees; others focus on new hires or managers and supervisors. Still others focus on specific industries, such as hotels and retail. Find a full examination of these harassment training requirements on a previous Employment Law News blog.

Lastly, jurisdictions have sometimes set lower standards to establish claims or extended statutes of limitations to file claims, another facet of #MeToo employment laws. Multi-jurisdiction employers should be sure to consult local regulations to ensure they’re in compliance.

Depending on the source, women in the U.S. earn about 81 percent of what men earn. The #MeToo Movement has further highlighted these inequities, and most states have equal pay laws on the books.

Generally, these laws prohibit employers from paying employees less on the basis of race or sex. Some also ensure companies cannot limit employment opportunities based on sex or gender identity, as is the case in Maryland, which added new civil penalties to its equal pay law last year.

The climate has also spurred some larger employers to audit payroll ledgers and work to correct discrepancies, according to a New York employment lawyer.

Elsewhere, states are limiting liability for employers that examine potential pay inequities and take steps to correct them.

State and local equal pay laws have increased in recent years, with some states, including New Jersey, expanding protections beyond gender and race to cover relationship status, ancestry and more.

Perhaps not as prominent as harassment training and equal pay, salary history bans have also accelerated in recent years in response to #MeToo.

Most recently, Maryland’s salary history ban went into effect Oct. 1, 2020. Like similar measures elsewhere, it includes a component that applies gender-based pay discrimination to job applicants as well as employees. It stipulates that employers may not:

The idea behind salary history bans is the notion that women (as well as other groups) are typically paid less than their male peers. When an employer uses pay history to make decisions, it continues the trend.

Nearly 20 states and as many smaller jurisdictions have salary history ban laws in place, with all going into effect between 2017 and 2020.

In addition to the #MeToo laws above, there are other considerations for employers as they navigate this new landscape.

Interesting legislation has developed regarding confidentiality in settlement agreements, non-disclosure provisions and testifying.

And in California, a law signed in 2018 mandates that publicly held businesses there must have at least one woman on its board of directors. More stringent guidelines, based on the number of individuals on a company’s board of directors, will go into effect Dec. 31, 2021.

For another example, Illinois in 2019 passed several new measures related to the #MeToo Movement designed to curb workplace sexual harassment in the workplace:

In light of these and other laws, employers would be wise to re-examine their policies to align with new regulations and the current cultural climate.

Despite the fact that the COVID-19 pandemic has garnered much of the attention in the realm of employment law over the past several months, employer requirements related to #MeToo will likely continue to be enacted.

The #MeToo Movement has already created a wave of new statutes for employers to follow. Once the pandemic subsides, the attention of legislators will likely return to these laws.

Answers to Your COVID-19 Employment Law Questions
Scroll to top