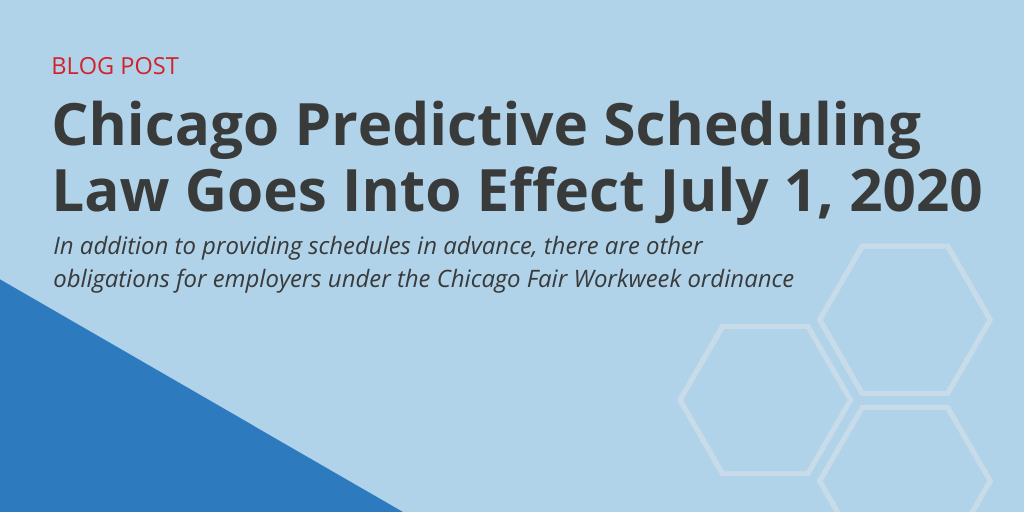 In addition to providing schedules in advance, there are other obligations for employers under the Chicago Fair Workweek ordinance.

Employers in the Windy City should be ready to comply with Chicago’s new predictive scheduling law, which goes into effect July 1.

The city last summer passed the Chicago Fair Workweek ordinance, which local officials have deemed the most expansive scheduling policy in the U.S. It includes businesses beyond hospitality and retail, covering additional sectors not often found in predictive scheduling laws. Those include:

Of course, the ordinance still applies to hotels, restaurants and other similar companies.

“The new Fair Workweek Ordinance stands as a bold step in providing the reliability our working families both need and deserve,” Chicago Mayor Lori Lightfoot said in a statement. “I understand firsthand the burden lack of scheduling stability places on a family. After collaborating with labor, businesses, industry groups and other organizations across healthcare, hospitality, manufacturing, and retail industries, we have arrived at a set of reforms which strikes the right balance between the needs of employers and employees, as well as serves as a model for the nation on supporting worker fairness and worker’s rights.”

The ordinance includes a posting requirement. It must also be provided with first paychecks.

Expected to affect hundreds of thousands of workers, Chicago’s ordinance is primarily aimed at large employers.

It applies to businesses with more than 100 employees globally, 50 of whom must be covered employees. Also, restaurants must have at least 30 global locations for the law to apply. There are also provisions for businesses that are “prone to unforeseen events,” there are provisions within the ordinance to reasonably accommodate them.

Covered employees are those who:

Temp workers on assignment for at least 420 hours within an 18-month period are also covered by Chicago’s predictive scheduling ordinance.

Under the Fair Workweek ordinance, employers must schedule workers at least 10 days in advance. In 2022, the timeframe will increase to 14 days.

Other requirements for employers include:

The Chicago Department of Business Affairs and Consumer Protection will administer and enforce the ordinance. It will also report on the economic impact of the Fair Workweek law in the fall of 2021.

Lastly, while the ordinance goes into effect July 1 for most employers that fall under the legislation, it won’t until Jan. 1, 2021, for “safety net hospitals.”

One of many growing aspects of employment law, predictive scheduling is to give hourly employees more work-life flexibility.

While these measures generally require employers to give workers schedules ahead of time, they sometimes include other obligations, such as then elimination of on-call scheduling (when employers make workers call in shortly before their work shift starts to see if they need to report to work that day).

While they are all a bit different, they basically follow a similar set of rules:

Oregon was the first state to pass this type of legislation.

For more information on predictive scheduling, check out our blogs on: