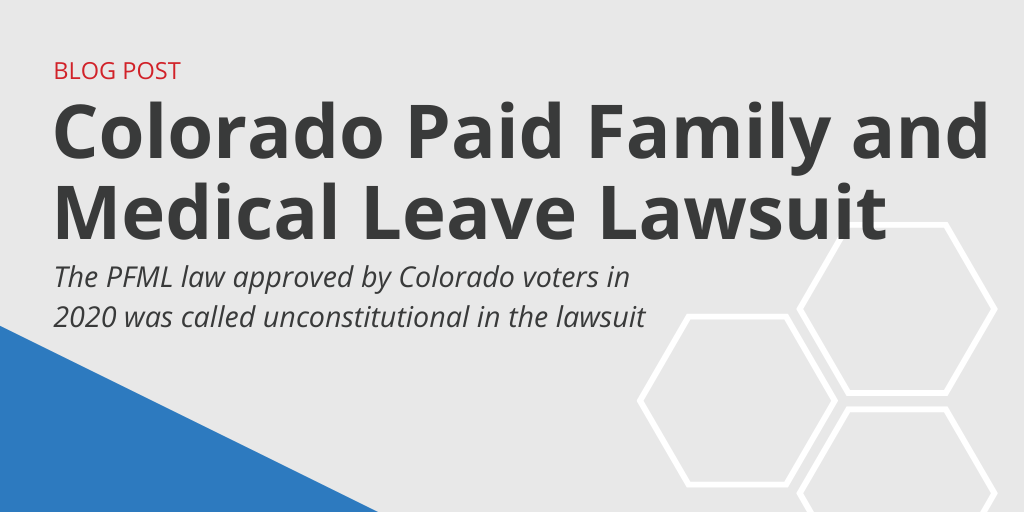 The building company that is part of the lawsuit has nine employees and says it is hesitant to make another hire because of Colorado’s new PFML law and the 10-worker threshold for employers to pay into the program.

Nearly 58 percent of voters approved Proposition 118 in November 2020, marking the first time a paid leave law was put on the ballot. (It needed only a simple majority to pass.)

Filed on behalf of a building company, the lawsuit argues Colorado’s paid family and medical leave (PFML) is unconstitutional because the funding mechanism, which both employees and employers pay into, is applied unevenly. Employers with 10 or more workers must pay into the program.

“This is just an income tax by another name,” Dan Burrows, the legal director with the Public Trust Institute, told reporters. “The state constitution is clear that if government wants to fund a new program by taxing wages, it has to treat everyone the same, no matter how attractive the aims of that program might be.”

The building company that is part of the suit has nine employees and says it is hesitant to make another hire because of Colorado’s new law and the 10-employee threshold. Companies with nine or fewer workers would not have to pay the employer half of the premium. The company does not have its own paid leave policy.

As a reminder, Colorado’s PFML program applies to nearly every employer in the state. Employees can begin using benefits starting in 2024.

Employers must provide 12 weeks of paid time off for the birth of a child and family emergencies, with an additional four weeks for pregnancy or childbirth complications. Other covered reasons for use include adoption, military service, and abuse and sexual assault.

The law does allow local governments to opt out of the PFML program.

Qualifying reasons for use include:

Weekly benefits under the program are determined as follows:

Start collecting fees from employees and employers in 2023, with benefits starting in 2024.

The state also has provided a $1.5 million loan to help fund the program’s startup costs.

It remains to be seen how the lawsuit will impact PFML in Colorado.

But employers should monitor the situation, much like the recent court cases in Texas cities that passed paid sick leave laws, to determine what steps, if any, they may need to take.

Paid leave in its many forms has become a growing facet of employment law. For employers with locations across the U.S., keeping track of these laws to remain complaint will be paramount in the future.