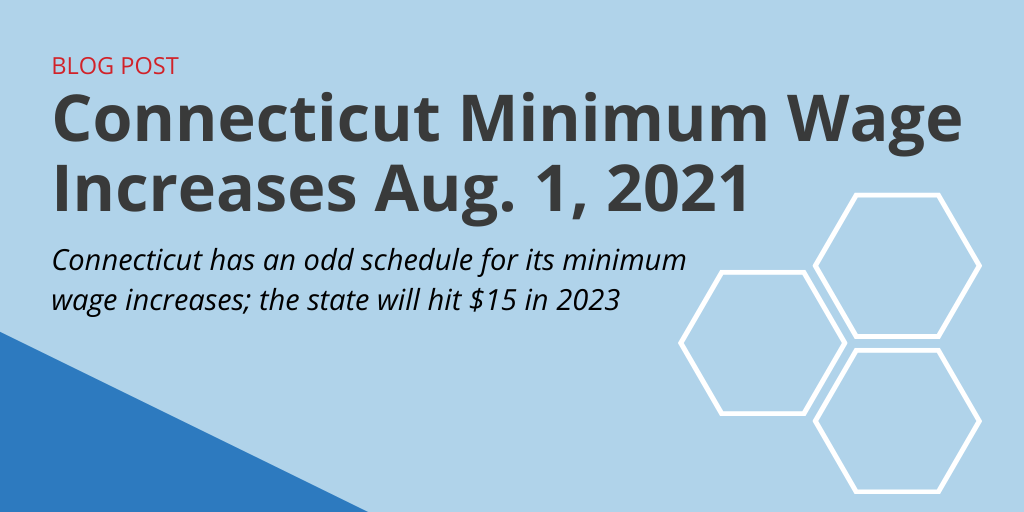 The increase is part of an odd schedule for Connecticut. Last year, the state’s minimum wage increased on Sept. 1. In 2022 it will increase on July 1. And it will go up again June 1, 2023.

While most minimum wage increases happen July 1 or the start of the year, employers still need to monitor jurisdictions that may have scheduled bumps at other times of the year.

Connecticut in 2019 enacted a law to eventually increase minimum wage to $15 an hour. It is one of several states, counties and cities nearing the threshold, and a few have surpassed that number.

Future increases for the standard minimum wage rate in Connecticut are:

After 2023, increases will go into effect Jan. 1 each year based on the employment cost index.

Meanwhile, Connecticut does have separate wages for employees in certain industries who regularly receive tips. Those will remain the same:

Lastly, Connecticut’s minimum wage law includes a provision that increases may not go into effect should the state suffer an economic slump. A similar situation arose recently in Cook County, Ill., though it was based on unemployment numbers. In Connecticut, it would be a recommendation from state officials whether to suspend a minimum wage increase based on two consecutive quarters of negative growth.

As mentioned, Connecticut is among a growing number of jurisdictions headed for a $15 minimum wage.

The Fight for $15 movement has played a role in the trend, as well as the federal minimum wage ($7.25) being unchanged for more than 10 years. Increasingly, lawmakers are proposing and passing minimum wage legislation. Plus, the discussion on minimum wage rates has become more prominent during the pandemic, which disproportionately impacted low-wage workers:

Within the worst-hit sectors, workers in the lowest average wage and lowest average hour occupations were hit the worst and remain most damaged a year later. While aggregate output data (for example, gross domestic product) appears to have rebounded significantly by February 2021, the “output gap” — the difference between actual and potential economic output — that remains represents a far greater share of jobs because the still-jobless workers in the economy previously worked in some of the most disadvantaged sectors in terms of wages and weekly hours. — Economic Policy Institute

This situation — along with worker shortages and the general economic rebound as the nation pulls out of the COVID-19 pandemic — could prompt additional legislation moving forward.

For employers with locations in Connecticut, keeping up with the odd minimum wage schedule is part of the employment law compliance puzzle.