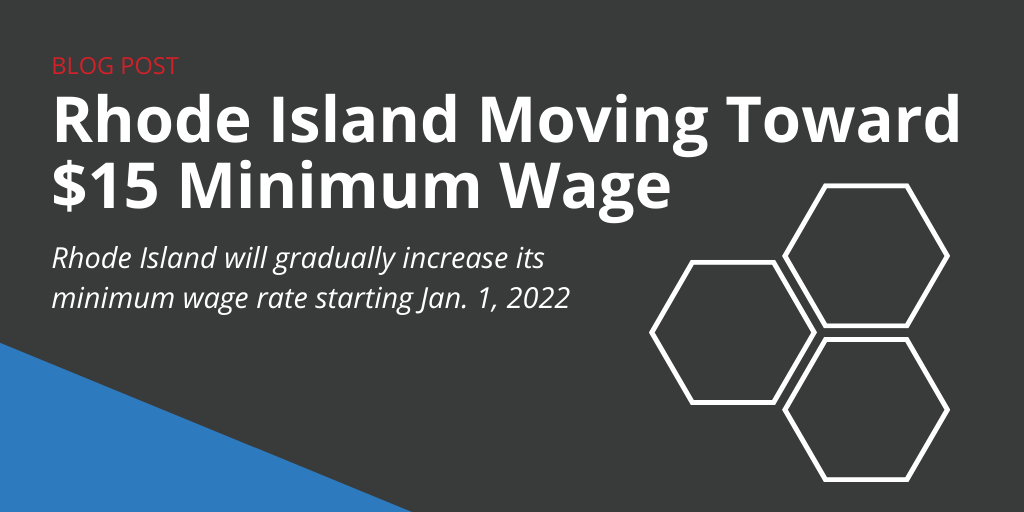 Joining nearby Massachusetts and Connecticut to eventually hit the $15 minimum wage mark, Rhode Island officials expect the new rates to impact 70,000 employees by 2022 and 140,000 by 2025.

Continuing a growing trend, Rhode Island is moving toward a $15 minimum wage.

The governor in late May 2021 signed a bill to increase minimum wage in Rhode Island, with the first bump set for Jan. 1, 2022.

Joining nearby Massachusetts and Connecticut to eventually hit the $15 minimum wage mark, Rhode Island officials expect the new rates to impact 70,000 employees by 2022 and 140,000 by 2025.

The new rates are:

“Raising the minimum wage will benefit thousands of working Rhode Islanders and families across our state,” Rhode Island Gov. Dan McKee said. “This boost in wages will go back into our local economy, supporting small businesses and our communities. I commend Representative Bennett, Senator Quezada and all the advocates who worked hard to get this bill across the finish line. This is an important step in the effort to help lift Rhode Island families out of poverty and support many of our essential workers who put themselves at risk to keep our state running during the pandemic.”

The minimum wage for tipped employees, however, will remain at $3.89.

Meanwhile, there are some exceptions to minimum wage in Rhode Island. The state allows:

The $15 minimum wage discussion was a hot topic before the COVID-19 pandemic struck. And it is picking up steam again, though efforts to increase minimum wage at the federal level appear to have stalled out for the time being. (A measure to make minimum wage $15 for federal contractors was successful, however.)

Plus, employers must also keep tabs on jurisdictions that update at odd times of the year, rather than July 1 and the start of the new year. For example, Connecticut minimum wage goes up Aug. 1, 2021, with different increase dates in coming years.

Employers with locations in Rhode Island should prepare for the upcoming minimum wage increases.

While it is the smallest state in the U.S., Rhode Island is poised to have thousands of employees impacted by the new rates in the coming years.

The move could also be a harbinger of things to come in the greater area, where many states have rates above the federal $7.25 an hour, but there are outliers such as New Hampshire and Pennsylvania. However, increasing the minimum wage to $15 has been proposed in Pennsylvania.

Ultimately, of course, employers must continue to keep an eye on changing rates across the country.