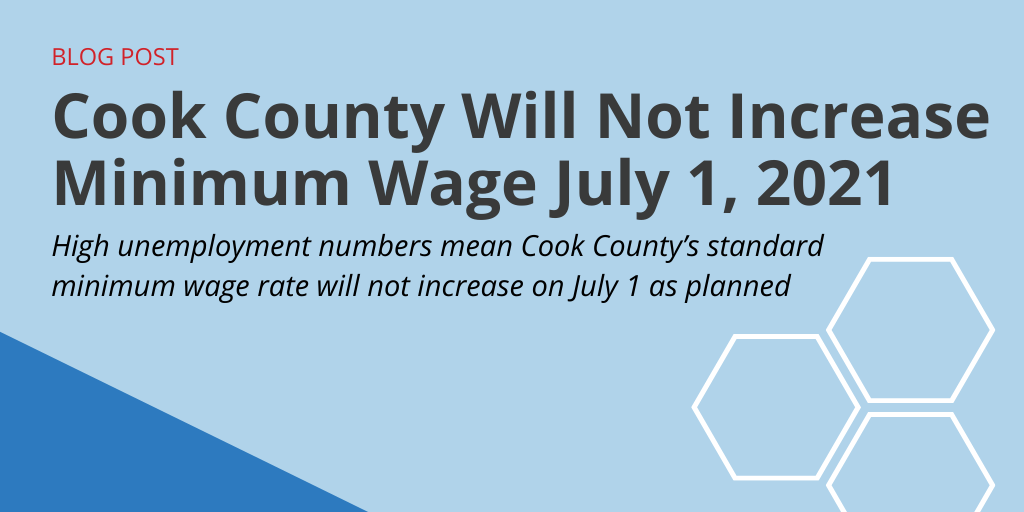 Because the unemployment rate in Cook County was above 8.5 percent over the previous year, the standard rate will not increase on July 1, 2021, as planned.

Cook County minimum wage will not increase July 1, 2021, due to unemployment numbers.

Officials in the Illinois county announced on June 7 that the standard minimum wage will remain at $13, the same as it has been since July 1, 2020.

Because the unemployment rate in Cook County was above 8.5 percent over the previous year, the standard rate will not increase.

An updated labor law posting has been issued.

The minimum wage ordinance in Cook County was passed in 2016, with scheduled standard rate increases set until 2020. It applies to nearly all employers in the county.

The July 2021 minimum wage update in Cook County was supposed to increase based on the Consumer Price Index for the first time. But it will not this year because of unemployment figures.

However, the minimum wage for tipped employees is $6.60, aligning with the Illinois state minimum wage, which increased Jan. 1. The ordinance states that Cook County applies the highest rate between federal, state or on the county’s calculation using the Consumer Price Index.

Employers should also check whether cities within Cook County have opted out of the minimum wage rate (and earned sick leave, as well). Also note that some cities may have only a portion of their land within the county borders.

Lastly, employers should remember that Chicago has its own minimum wage ordinance.

While Cook County is a unique case when it comes to minimum wage, other jurisdictions updating July 1, 2021, have their own quirks, as well.

The nationwide Fight for $15 movement, along with discussions at the federal level about a new rate, have continued the push for new and updated minimum wage laws.

The announcement of no increase to the standard minimum wage rate in Cook County in 2021 came less than a month before the planned update.

Employers should be sure to check opt-ins and -outs in cities within Cook County to ensure they are paying employees the correct rate.

For employers with locations in jurisdictions across the U.S., the typical midyear and new year increases are always top of mind. But there are places where rates increase at odd times of the year, such as October. And the pandemic also delayed planned increases in some jurisdictions.

With government officials keeping a close eye on wage theft, and COVID-19 also putting a spotlight on low-wage workers, employers should audit their locations to ensure they’re paying the correct rate.