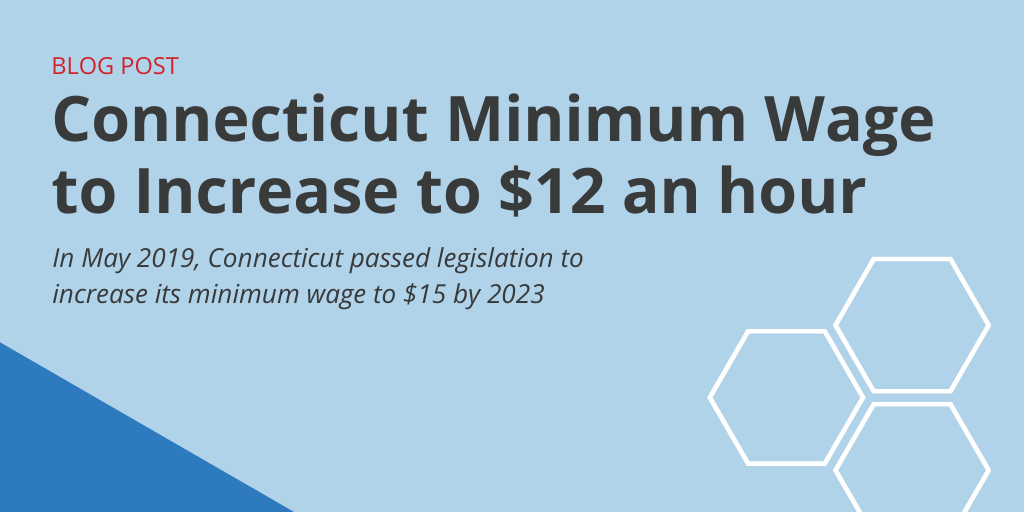 In May 2019, Connecticut passed legislation to increase its minimum wage to $15 by 2023. At that time, lawmakers estimated the increased minimum wage would impact more than 330,000 employees in the state.

Employers should also note that three jurisdictions pushed back planned minimum wage increases last month due to concerns over economic impacts related to COVID-19. They are:

Employers are required to display a new labor law posting associated with the increased rate. The related posting in Connecticut hadn’t been updated in a few years.

In May 2019, Connecticut passed legislation to increase its minimum wage to $15 by 2023. At that time, lawmakers estimated the increased minimum wage would impact more than 330,000 employees in the state.

Connecticut will stay on a somewhat unusual schedule for rate increases over the next few years:

The state does have separate wages for so-called “service employees.”

Here’s how Connecticut describes these workers:

A “service employee” is defined as any employee whose duties relate solely to the serving of food and/or beverages to patrons seated at tables or booths, and to the performance of duties incidental to such service, and who customarily receives gratuities.  This means that a tip credit (toward the minimum wage) can be taken only for waiters and waitresses, and only during the time for which they are actually serving patrons at tables or booths, or performing closely related duties, and when they are receiving gratuities.

That means for employees to be eligible for tip credits, they must engage in certain duties, defined as:

However, employers may split minimum wage versus tipped credit wages should employees work as both a server and cook, for example.

Find more specifics on other types of wage rates on the Connecticut Department of Labor’s website.

Connecticut has long been a leader in terms of minimum wage increases. In 2014, the state made plans to eventually have the highest increase in the nation.

That prompted former President Barrack Obama to promote an increased federal minimum wage. Of course, that didn’t come to pass, which prompted more jurisdictions to address rates on their own in recent years.

The federal minimum wage still sits at $7.25 and hasn’t been increased in more than a decade — the longest such stretch in U.S. history.

Tracking the intricacies of minimum wage rates has become more challenging for employers over the past few years. In addition to regular rate changes, there are other hurdles to overcome, including wages by industry, tipped wages, wages for small and large employers, and more.

And jurisdictions changing rates outside of the new year and July 1 adds another layer to the complexity of employment law compliance.