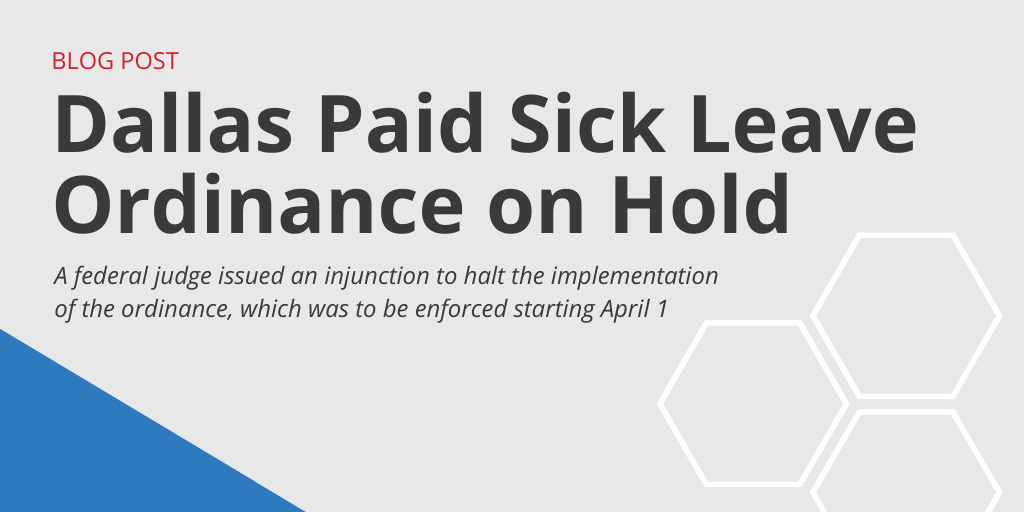 A federal judge on March 30 issued an injunction to stop the implementation of the ordinance, the latest in a series of stops and starts for paid sick leave laws in major Texas cities.

Paid sick leave in Dallas is on hold.

A federal judge on March 30 issued an injunction to stop the implementation of the ordinance, the latest in a series of stops and starts for paid sick leave laws in major Texas cities.

Initially, Dallas’ Earned Paid Sick Time ordinance went into effect for employers with more than five workers on Aug. 1, 2019, though the city did not plan to enforce any aspects of the measure other than an anti-retaliation provision until April 1 this year.

But a group — comprising the state, an employee solutions company and a Texas law firm — was able to have Judge Sean Jordan halt the full implementation of the paid sick leave ordinance.

“Whether or not paid sick leave requirements should be imposed by government on private employers is an important public policy issue, made even more significant under the challenging circumstances faced by our Nation at this moment,” Jordan wrote in a memorandum opinion and order, referencing the current COVID-19 pandemic. “The State of Texas, through its constitutional structure and statutory law, has committed that public policy decision to the Texas legislature.”

City officials in Dallas have been mulling how to proceed in the wake of the judge’s decision, which says the ordinance violates the Texas Minimum Wage Act. That argument has also been used to hold up similar paid sick leave ordinances in the Texas cities of Austin and San Antonio.

How Paid Sick Leave in Dallas Would Work

If it eventually comes to fruition, paid sick leave in Dallas would:

Also of note, employers with five or fewer workers would have had until Aug. 1, 2021, to comply with the law. Find other provisions of the ordinance online.

While it’s unclear what the immediate future holds for paid sick leave in Dallas, other cities have seen eventual success following legal challenges. Pittsburgh, after a four-year legal battle, saw its paid sick leave law go into effect in March 2020.

A labor law posting regarding the paid sick leave ordinance in Dallas was issued this summer.

The tight timeline between what was supposed to be the implementation date of paid sick leave in Dallas and the judge’s decision underscores an important aspect of paid leave laws today: they’re moving more quickly than ever before.

Much of that, of course, has to do with the coronavirus. Several jurisdictions have implemented emergency paid sick leave laws related to COVID-19, and that includes the federal paid sick leave and expanded family and medical leave act that recently went into effect.

Lawmakers are passing employment laws rapidly in an effort to quell the impacts of the coronavirus on the public, from expanded unemployment benefits to paid sick leave and other measures. Employers should review the local laws where they have locations to remain compliant in this ever-changing employment law landscape.

More Stories From Employment Law News
What Does the Coronavirus Stimulus Package Mean for Employers?

Companies Doing Good During the Coronavirus Pandemic
Scroll to top