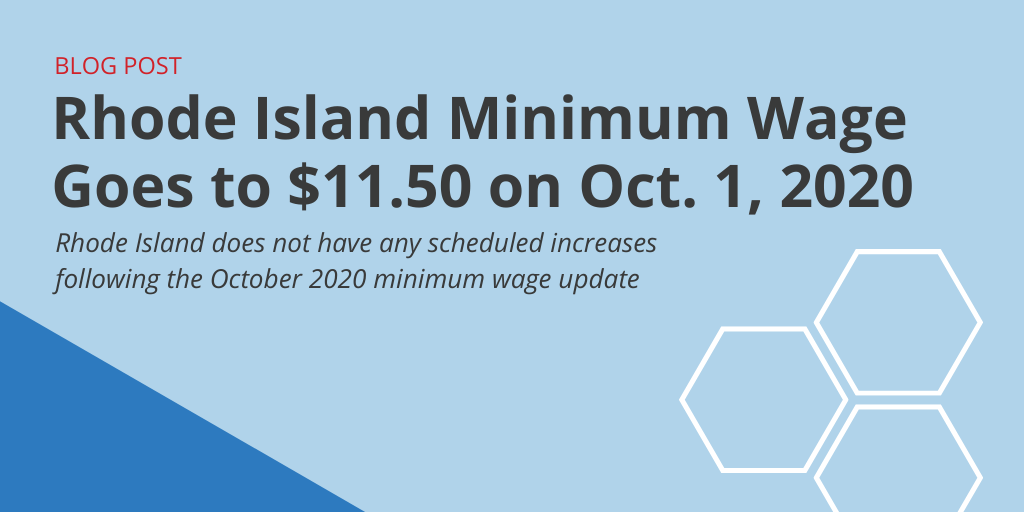 Rhode Island does not have any scheduled increases following the October 2020 minimum wage update.

While states often include scheduled minimum wage increases when passing such legislation, Rhode Island’s law does not include any future bumps. Recently, states have generally scheduled a few years of increases, with future rates tied to the Consumer Price Index.

Meanwhile, in addition to the tipped minimum wage of $3.89, there are exemptions for a few categories of employees, including:

Violations of minimum wage laws in Rhode Island can cost employers between $100 and $500 for each day of not paying employees the correct wage.

An estimated 25,000 to 30,000 employees in Rhode Island earn minimum wage. Lawmakers said the increase was needed to keep pace with surrounding states. Connecticut’s minimum wage increased to $12 this month and the minimum wage in Massachusetts is $12.75, with a planned increase set for Jan. 1, 2021.

“Putting more money in the pockets of those with the lowest wages helps their families and the economy overall, because people at that end of the wage spectrum pump that money right back into the local economy, buying necessities. It also means less demand for public assistance. A stronger minimum wage will mean a stronger economy for Rhode Island,” said State Rep. David Bennett said in a statement. “I believe very strongly that all working people deserve to be able to afford a decent life. Minimum wage hasn’t kept pace with inflation since it began, and Rhode Island’s remains behind neighboring states’. Each time we raise it, it means a bit of relief and a bit more dignity for those workers who struggle the most to afford life in Rhode Island.”

While employers have to keep a lookout for minimum wage rate increases at the start and middle of the year, there are jurisdictions that plan increases at other times, as is the case in Rhode Island, where previous increases were generally scheduled for Jan. 1.

For 2020 summer increases, check out our resources:

The federal minimum wage rate, $7.25, has not increased in more than a decade, prompting cities, counties and states to take on the issue.

The nationwide push for a $15 minimum wage — the Fight for $15 — has slowed somewhat during the COVID-19 pandemic, which has put more of a focus on paid leave laws. But in all likelihood employers will see more minimum wage legislation in the years to come, adding a level of complexity for large businesses that operate across the U.S.