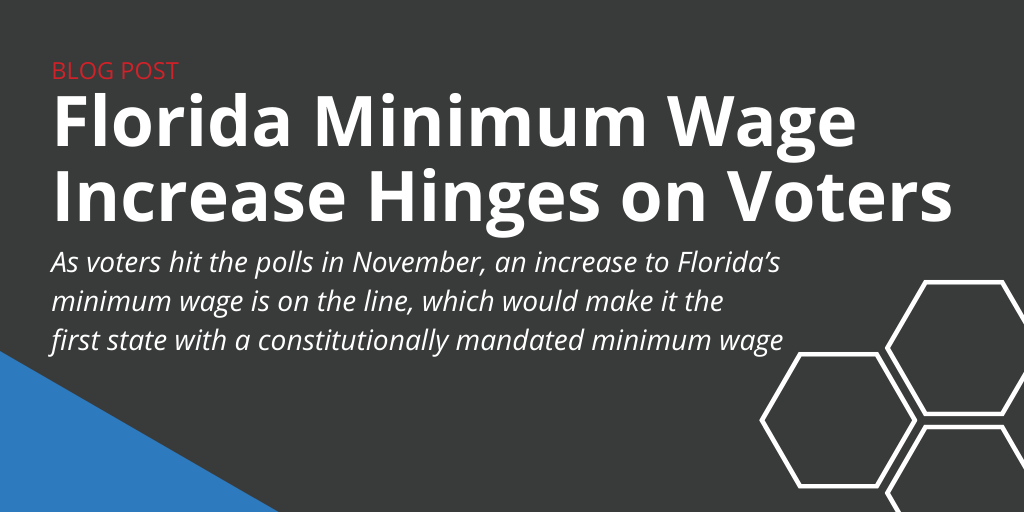 As voters hit the polls in November 2020, an increase to Florida’s minimum wage is on the line, which would make it the first state with a constitutionally mandated minimum wage.

Should voters approve a November ballot measure, Florida would become the first state in the U.S. with a constitutionally mandated minimum wage rate. Voters will decide whether the Florida minimum wage should eventually reach $15 an hour in 2026.

The unique ballot initiative would require more than 60 percent of the vote to pass. Despite Florida’s large service economy, it remains to be seen how voters will react to mandated minimum wage increases as the state — and nation as a whole — struggles during the COVID-19 pandemic.

If passed, minimum wage increases would be scheduled on Sept. 30 each year.

After that point, minimum wage in Florida would be tied to the Consumer Price Index, with the Sept. 30 effective date remaining in place.

A Florida attorney spearheaded the initiative, donating money to a political action committee dedicated to increasing the state’s minimum wage. The group says 200,000 Floridians currently earn minimum wage and cites a Massachusetts Institute of Technology study saying a single adult needs to earn more than $12 an hour to earn a living wage in the state.

Voters in Florida will hit the polls Nov. 3 to decide.

While Florida is taking the unusual step to codify minimum wage laws in its constitution, other states, cities and counties generally make minimum laws through legislatures, county boards and city councils.

With the federal minimum wage ($7.25) unchanged in more than a decade, dozens of jurisdictions across the U.S. have made minimum wage increases a priority in recent years.

It will be interesting to see the outcome of Florida’s minimum wage ballot initiative.

Should it succeed, of course, employers with locations in the Sunshine State will have to plan budgets and make adjustments for 2021 and beyond. But it could also be a harbinger of how minimum wage increases are handled in the future.

The Florida situation is somewhat different, in that it was a well-funded effort to get the referendum on the ballot. Still, as employment laws become more prevalent across the U.S. — particularly paid leave in relation to public health emergencies — companies could have to keep an eye on ballot measures in addition to legislatures.