Legalized Marijuana in Connecticut: What Employers Need to Know 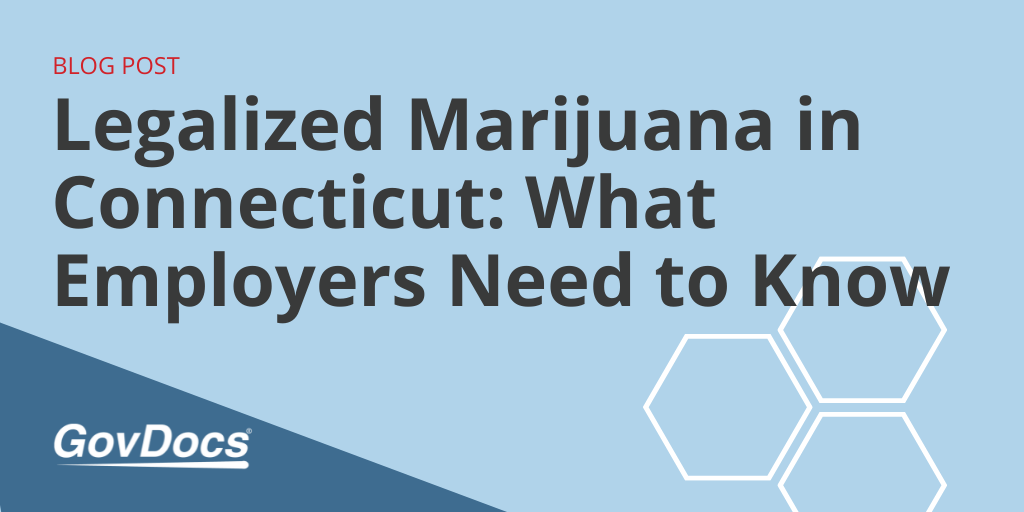 With Connecticut joining the states allowing recreational marijuana use, employers with locations in the state may want to consider re-examining company policies.

Legalized marijuana in Connecticut went into effect this summer, which opened the door for employment law concerns for many large companies.

The growth of legalized recreational marijuana across the U.S. in recent years has created additional hurdles for employers, from testing existing employees to hiring new workers and understanding the varying levels of protection offered in each jurisdiction.

Connecticut’s law, which went into effect July 1, 2021, allows adults 21 and older to possess up to 1.5 ounces marijuana. Retail sales are expected to begin at the end of 2022.

Why did Connecticut adopt a legalized recreational marijuana law? According to the governor, the answer was twofold.

“For decades, the war on cannabis caused injustices and created disparities while doing little to protect public health and safety,” Gov. Ned Lamont said in a release. “The law that I signed today begins to right some of those wrongs by creating a comprehensive framework for a regulated market that prioritizes public health, public safety, criminal justice, and equity. It will help eliminate the dangerous, unregulated market and support a new and equitable sector of our economy that will create jobs. The states surrounding us already, or soon will, have legal adult-use markets.”

Like most legalized recreational marijuana laws, employers in Connecticut are still free to maintain a drug-free workplace.

However, there are other factors for employers to note regarding the law:

Still, employers in certain industries, such as manufacturing and healthcare, are considered “exempt” from the employment provisions of the law. As always, employers should consult with legal counsel regarding hiring and testing policies.

Marijuana Legal in Four More States: What Now for Employers?

The continued expansion of legalized marijuana across the country has led to discussions of how employers address usage, especially as it relates to hiring.

For example, Nevada passed a law making it illegal to refuse to hire someone based on the presence of marijuana in pre-employment drug screenings. (There are exceptions for emergency personnel, drivers, etc.)

Generally, it’s up to the employer to examine operations and weighing the implications before settling on a drug-testing policy. But that, too, can cause issues.

Meanwhile, Connecticut expects the funds to help the state economically through a fund established to provide business capital, technical assistance for business start-ups and operations, workforce education, and community investments.

“By allowing adults to possess cannabis, regulating its sale and content, training police officers in the latest techniques of detecting and preventing impaired driving, and expunging the criminal records of people with certain cannabis crimes, we’re not only effectively modernizing our laws and addressing inequities, we’re keeping Connecticut economically competitive,” Lamont said.

With Connecticut joining the states allowing recreational marijuana use, employers with locations in the state may want to consider re-examining company policies.