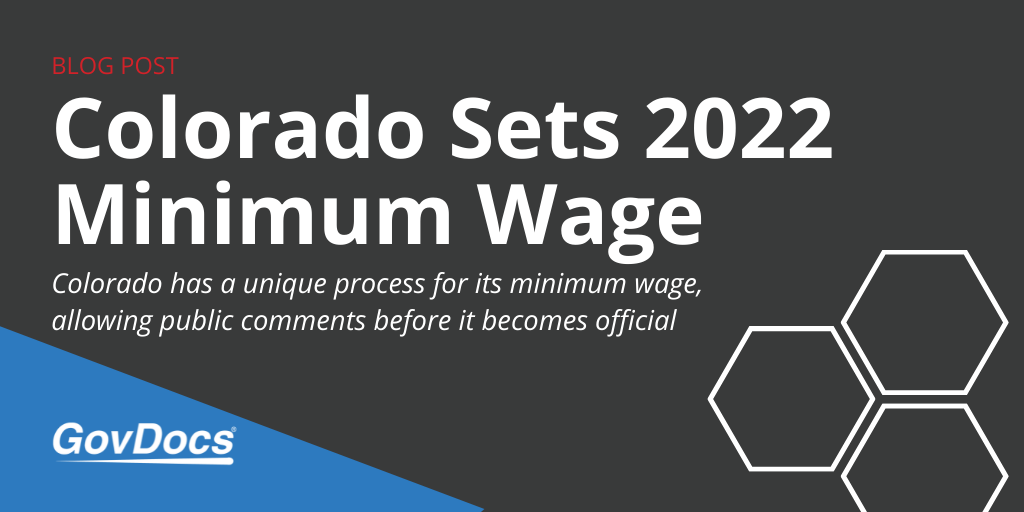 Colorado’s 2022 minimum wage was set this week, opening up a comment period before the rate becomes official.

“As we build back better, it’s great to see Colorado workers get a decent raise on the minimum wage to $12.56/hour as our state builds an economy that works for everybody,” Gov. Jared Polis said in a statement. “Investing in upskilling to help workers have the skills needed to earn much more than minimum wage is one of our top priorities, so Colorado can continue to be a place where everyone can thrive.”

Minimum wage in Colorado goes up from $12.32 today to $12.56 in 2022 under annual increases based on the Consumer Price Index. (However, the rates were increased by larger amounts from 2017 through 2020 due to a successful 2016 ballot measure.)

Under a constitutional mandate, Colorado officials each September publish proposed rules for minimum wage, which is followed by a public comment period. This year, the comment period closes Nov. 3. It’s a somewhat unique situation in how Colorado — one of the most employee-friendly states in the U.S. — establishes its minimum wage rate.

Find information on making comments on the governor’s website.

When jurisdictions pass laws to increase minimum wage rates — a major employment law trend over the past several years — they often start with a set schedule and move to indexed rates after a period of years.

And at this time of year, many of those jurisdictions with indexed minimum wage rates begin releasing the updated figures for the next year. It creates a difficult situation for employers to know what rates will be when scheduled increases change over to indexed rates.

Related: How Many States Have a $15 Minimum Wage?

Employers with locations in Colorado should note the likely change to the state’s minimum wage rate.

The state has a full rundown of Colorado’s minimum wage rules on its website.

Legalized Marijuana in Connecticut: What Employers Need to Know
Scroll to top