Top 5 Employment Law Topics You Missed Because of COVID-19 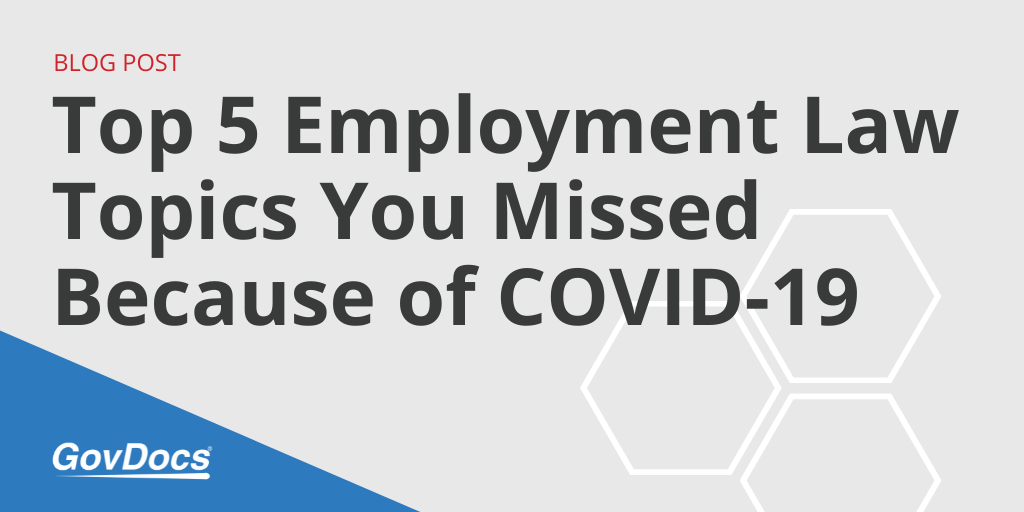 While the COVID-19 pandemic and the new laws and regulations it captured the focus of compliance teams, other unrelated laws continue to be passed in jurisdictions across the U.S.

As employers continue to grapple with the impacts of COVID-19, you may have missed other employment law happenings over the past couple of years.

The focus for HR and compliance teams has so often been on the pandemic — state and local safety regulations, internal vaccine policies, emergency paid leave, “hero” pay, a federal vaccine mandate for large employers…

But the past several months have also seen lawmakers continuing to introduce and pass legislation of the non-COVID variety.

Those trends largely followed what was happening before the pandemic struck. And here are the top five employment law topics you missed because of COVID-19.

(Of course, the employment law issues discussed below almost always carry an associated labor law posting, which employers should be aware of as part of their larger compliance efforts.)

Minimum wage legislation was surprisingly active during the pandemic, chief among them the executive order to give federal contractors $15 an hour starting Jan. 30, 2022.

This summer, Delaware passed a new minimum wage law that will eventually bring the state’s rate to $15.

While Delaware already had a rate higher than the federal level, lawmakers still opted for another increase. The law will bring gradual rate increases to the standard minimum wage rate over the coming years. Increases are set for Jan. 1 each year.

Like Delaware, Rhode Island also passed a law to eventually have a $15 minimum wage.

Signed into law in May 2021, the minimum wage in Rhode Island will also follow a schedule of gradual increases, as lawmakers wanted to remain competitive with neighboring states with higher rates.

The new rates are:

Meanwhile, in one of the more unique minimum wage developments in recent years, Florida saw its rate increase twice in 2021.

Florida already had an increase scheduled for the outset of the year, but a voter-approved ballot initiative from 2020 went into effect Sept. 30, 2021. It, too, is marching toward a $15 minimum wage, with upcoming rates of:

While states continue climbing toward a $15 minimum wage rate, other legislation was introduced over the past couple of years.

In May 2021, a bill was introduced in New York State to allow smaller jurisdictions to set their own minimum wage rates.

The state does not have a preemption law on the books, but courts have interpreted New York statutes to bar local rates. And employers with locations there already know about the separate rates for New York City and the counties of Suffolk, Nassau and Westchester.

The legislation bears watching for the potential impacts to the less-dense areas of the state, and it would also, if passed, enable New York City and the three counties to opt for even higher minimum wage rates.

In Ohio, legislators in March 2021 introduced a bill to increase the state’s minimum wage rate to $15 by 2025.

The bill calls for new rates starting at the beginning of 2022, with increases on Jan. 1 each year:

Tipped employees in Ohio would also see a minimum wage bump under the plan: not less than half the standard rate. It would eventually reach $7.50 in 2025 should the bill become law.

Minimum wage in Pennsylvania is currently at the federal level of $7.25. Neighboring states, including New York, New Jersey and Maryland, all have rates above the federal figure, which has been unchanged for more than a decade.

In March 2021, the Pennsylvania governor called for scheduled increases until it, too, reaches a $15 minimum wage in 2027. However, the bill hasn’t gained much traction in the state.

Of course, the pandemic did impact minimum wage in other ways, with Virginia pushing its rate back, and Michigan’s and Cook County’s not going into effect because of unemployment numbers, and Denver had considered a delay, as well.

While delays to minimum wage laws were impacted by the pandemic, the same cannot be said for paid leave.

Chicago in June 2021 expanded the covered reasons for use under its paid sick leave law.

The new reasons include issues related to mental and behavioral issues among an employee or family member, as well as dealing with problems related to substance abuse. Also, the reasons to take paid sick leave to cope with domestic violence or sex offenses were expanded to cover stalking, aggravated stalking and cyberstalking.

In November 2020, voters in Colorado approved a paid family and medical leave law.

Employers must provide 12 weeks of paid time off for the birth of a child and family emergencies, with an additional four weeks for pregnancy or childbirth complications. Other covered reasons for use include adoption, military service, and abuse and sexual assault.

However, the law faced a legal challenge during the summer of 2021.

Maine in January 2021 joined the few jurisdictions that have a paid leave law that allows employees to use the time for any reason (Bernalillo County, N.M., and Nevada also have paid leave that can be used for any reason.)

The law applies to all nearly employers in Massachusetts and allows eligible employees to take up to 26 weeks of paid leave for family and medical reasons.

Like most paid sick leave laws, employees accrue leave as they go — one hour of paid leave for every 30 hours worked, capped at 64 hours a year. Employers can elect to implement a higher accrual rate.

The paid sick leave law in New Mexico applies to nearly all employers.

After some procedural hiccups, paid leave in Allegheny County, Penn., was finally approved in September 2021.

Employees would accrue one hour of paid sick leave for every 35 hours worked. The maximum accrual would be 40 hours, though employers could designate a higher amount.

It now aligns with the state’s accrual rates and usage parameters, as well as creating new notice requirements and expanding the definition of “adverse actions.”

Lastly, during the spring of 2021 North Dakota banned paid family and medical leave ordinances for cities and counties.

October marks four years since beginning of the #MeToo movement, whose sweeping impacts to employment law extended through the pandemic.

The laws stemming from the movement can take many forms, including:

Impacts of #MeToo have also extended into gender definitions. During a recent GovDocs Compliance and Coffee event, one HR executive said her team completely revised company policies to remove gender-specific pronouns — more than 500 policy and form revisions were made to make the pronouns nonbinary.

While employers themselves are bolstering efforts surrounding diversity, equity and inclusion, jurisdictions continue to pass laws regarding these topics.

For example, on Oct. 1, 2021, amendments to Connecticut’s equal pay law went into effect. At a high level, the amended law:

Connecticut’s law also stipulates that employers must provide wage range information for an employee’s job upon:

Meanwhile, California’s updated equal pay reporting requirements went into effect at the outset of 2021. Pay data must be reported to the state from any private employer with 100 or more workers March 31 each year and include information on the number of employees by sex, ethnicity and race in several specific job categories.

On another #MeToo front, Texas recently strengthened its sexual harassment laws, expanding protections for employees who file sexual harassment claims in the workplace. Also, supervisors, managers and other professionals that “act directly in the interests of an employer in relation to the employee” may also be named defendants in a sexual harassment complaint.

Also, in Illinois, all private employers were required to provide sexual harassment training to workers by Dec. 31, 2020, and annually in the future. That includes interns and part-time workers, as well.

Other states that had 2020 or 2021 deadlines for sexual harassment training include:

Hiring laws have also changed over the past couple of years, stemming from several subjects, including:

Ban the box laws — which generally bar employers from asking about an applicant’s criminal history until a later point during the application or hiring process — have been on the books in many states for some time.

But during the pandemic, three major U.S. cities saw ban the box news for employers to note:

Illinois also updated its ban the box law in March 2021, and Maryland’s went into effect in February 2020.

Most notably, Nevada passed a law making it unlawful to refuse to hire someone based on the presence of marijuana in pre-employment drug screenings. It went into effect at the start of 2020, and there are exceptions for some job types.

However, states with legal marijuana generally allow pre-employment drug screenings, but there are exceptions. For more information, check out our guide: Recreational Marijuana – What Employers Need to Know.

Employers should also note the states that passed marijuana ballot initiatives in 2020.

Less active than the hiring laws noted above, predictive scheduling remains a topic for employers to monitor.

Predictive scheduling laws mostly apply to businesses in the retail, food and hospitality industries. Generally, they require employers to post work schedules in advance, usually 14 days. They also often include telling new hires how many hours they can expect to work.

In the spring of 2021, New York’s predictive law was upheld following a legal challenge, and Chicago and Philadelphia also saw updates during the pandemic.

Meanwhile, Philadelphia’s predictive scheduling law was pushed back to April 2021 due to “the short amount of time between the anticipated posting of final regulations” and the original effective date, it was pushed back, according to the city.

Lastly, on the list of top five employment law issues you missed because of COVID-19, we come to wage theft.

The U.S. Department of Labor sends out daily bulletins of its enforcement activities — and they almost always include wage theft violations.

Most recently, California passed a new wage theft law that could land employers in jail for intentional violations.

Such incidents — intentional theft of wages, tips, benefits or compensation over $950 for one employee and over $2,350 for two or more employees in any 12 consecutive month period — would be considered grand theft in California.

Effective Aug. 1, 2021, Chicago has a new wage theft law. Employers can be found in violation for:

Employers should also note that employees can file claims with the Chicago Office of Labor Standards or via civil action, but not both.

Of course, a number of other jurisdictions have wage theft laws in effect. Look for an in-depth whitepaper on the topic from GovDocs next month.

While the COVID-19 pandemic and the new laws and regulations it created captured the focus of compliance teams, other unrelated laws continue to be passed in jurisdictions across the U.S.

As the pandemic recedes, employers will likely see renewed attention from legislators regarding these five topics and others.

The Difference Between Postings and Notices
Scroll to top