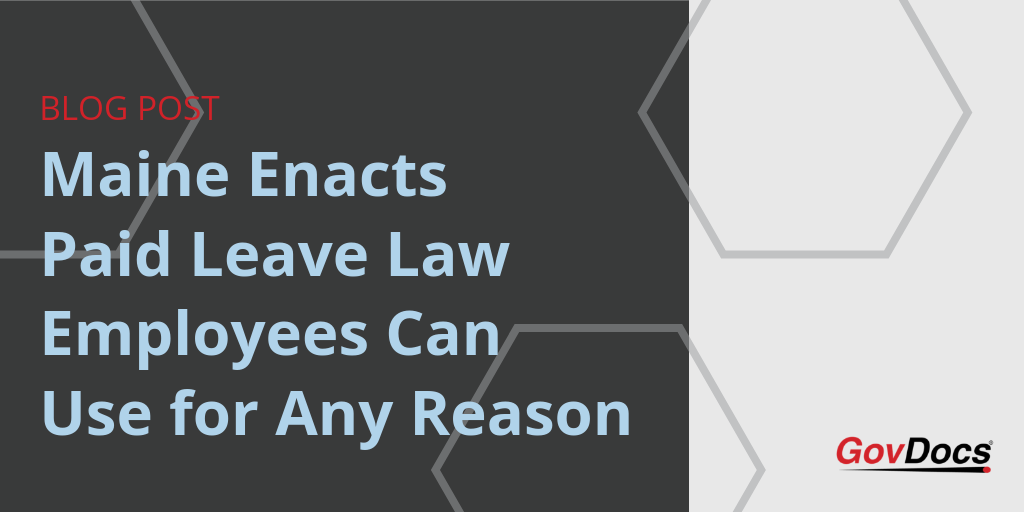 Did Maine recently become the 11th state to pass a paid sick leave law? Kind of.

Gov. Janet Mills in late May signed into a law a bill that requires companies with more than 10 employees to offer earned paid leave. The catch? Those employees can use their time off for any reason.

“From the start, this has always been about making sure Mainers don’t have to choose between the health of their family or their paycheck. By instituting a statewide earned paid time off policy, we are one step closer to this goal,” Sen. Rebecca Millett, said in a statement. “No one should worry about losing their job or paycheck when childcare is canceled or when their parent has a health scare. They shouldn’t worry about how they will pay for the flat tire on top of missing work while they get it repaired. This new law provides Mainers with some breathing room should the unexpected happen.”

One other noteworthy item in the Maine earned paid leave act: it prohibits smaller jurisdictions from enacting their own similar laws.

That nugget will likely be met with a sigh of relief from compliance, payroll and human resources professionals. Due to the rise in smaller jurisdictions enacting their own paid sick leave laws, the process of tracking paid leave regulations across the country is becoming more difficult. From Westchester County, NY, to Dallas to cities in California, officials have passed a spate of new laws in recent years.

“There’s no umbrella policy with paid sick leave,” said GovDocs’ Ryan Stilwell, who recently facilitated a compliance roundtable with HR pros from across the country. “They’re all different across cities, counties and states, and it’s really hard for companies to get consistent updates. It’s extremely time consuming; it’s extremely complex.”