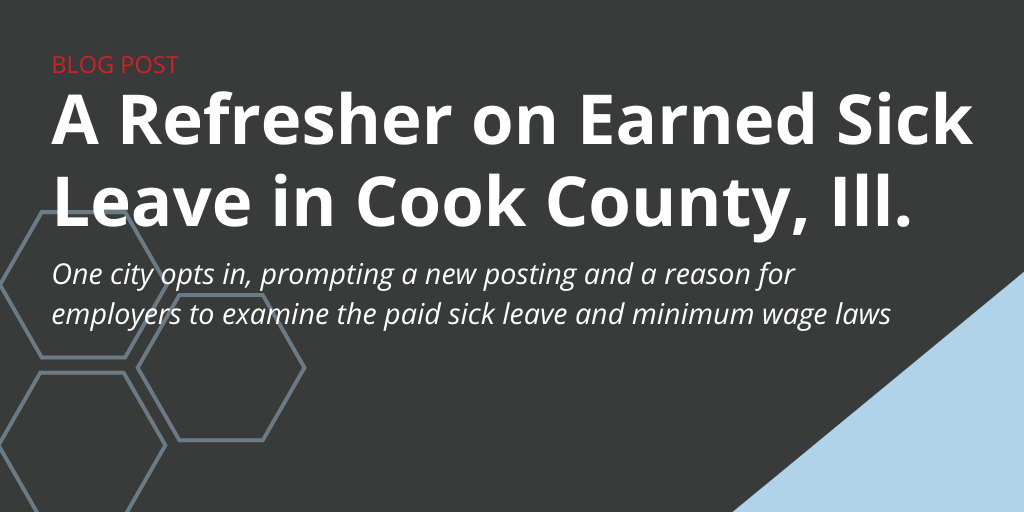 Though Cook County’s paid sick leave and minimum wage laws are distinct, most cities have chosen to act on the measures simultaneously.

Companies with workers in Cook County, Ill., know how cumbersome its ordinances can be when it comes to employment law compliance. Another piece was added to that puzzle last month, when Lincolnwood, Ill., opted into the county’s paid sick leave measure, but decided to remain out of the minimum wage ordinance.

Lincolnwood officials on Jan. 7 voted on the two items. By adopting the county’s Earned Sick Leave law, affected employers will have to display a new poster and notify employees of the change.

Though the decision from Lincolnwood — a suburb of Chicago with about 12,500 residents — might not impact a large number of employers, it does highlight the complex matrix of Cook County minimum wage and earned sick leave.

There are more than 130 jurisdictions within Cook County, and they can decide whether they want to adhere to the county’s minimum wage and paid sick leave laws.

Chicago has its own minimum wage and paid sick leave laws.

Here’s how it works:

As with paid sick leave laws across the country, an employee can use the time to care for his- or herself, as well as covered relations. But Cook County also allows the time to be used in case of business closures due to a public health emergency and the closure of a child’s school or daycare.

Lastly, “covered relation” in Cook County is broadly defined, including anyone related by blood as well as people who are “like family.”

Recent surveys of employers often point to paid leave as one of their biggest compliance concerns.

Meanwhile, the rise of paid leave, in its many forms, has become a larger part of the public discussion. That sentiment is reflected in pending legislation at the state and local levels of government. Indeed, as of late January, GovDocs was tracking 176 bills related to employee leave, with another 54 about paid sick leave specifically.

Yet it’s more than paid sick leave that employers have to worry about. Two states, plus a county in New Mexico, have passed laws that allow people to take paid leave for any reason. And late last month, the Vermont Senate passed a paid family and medical leave (PFML) bill. If enacted, the state would join eight others, plus Washington, D.C., with a PFML law on the books.

Additionally, these laws often require further guidance from labor departments, as was recently the case in New Jersey, illustrating the difficulty for employers to remain complaint.

The challenge, of course, is that these laws vary widely by jurisdiction, especially compared with something like minimum wage tracking. Compliance teams will have to be on their toes as additional paid leave laws go into effect.