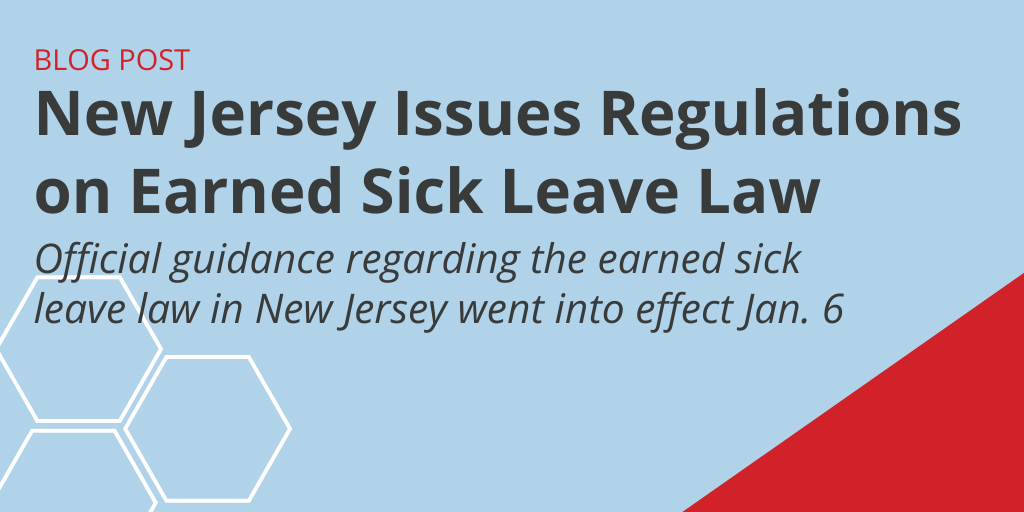 The New Jersey Department of Labor and Workforce Development earlier this month issued its new rules for the state’s Earned Sick Leave Law.

The 53-page document, released Jan. 6, attempts to answer employers’ questions and clarify inconsistencies in the bill, which passed in the spring of 2018 and went into effect that October. The final rules are now in effect, but the updates do not require a new posting.

Before we get to the department’s new regulations, here’s a quick refresher on what the New Jersey Earned Sick Leave Law requires.

The legislation is fairly straightforward — employees accrue one hour of time off for every 30 hours worked. Employers of all sizes are included. Workers can earn up to 40 hours of paid sick leave a year.

However, there are some exclusions, including construction workers covered by a collective bargaining agreement and per diem healthcare employees.

Still, the legislation left plenty of unanswered questions for businesses.

Among the changes was getting rid of requiring a blanket “benefit year” for all employees. Instead, the department plans to issue more information at a later date regarding multiple benefit years.

The new guidance also says that while frontloading of the paid time off is allowed, a “use it or lose it” policy is not permitted. Companies can pay out unused time at the end of a benefit year or allow it to be carried over, but employees can’t use more than 40 hours in a given benefit year.

Other items from the final rule:

The earned sick leave law in New Jersey provides a striking example of the complexity of such laws. More than a year after it was implemented, the state’s labor department issued guidance for employers.

These laws have created a patchwork of requirements across the country, which has made paid leave management one of the primary concerns for HR teams. Paid sick leave, paid family and medical leave, paid leave for any reason… each jurisdiction that enacts these types of laws does so with their own provisions, making them that much more difficult to manage.