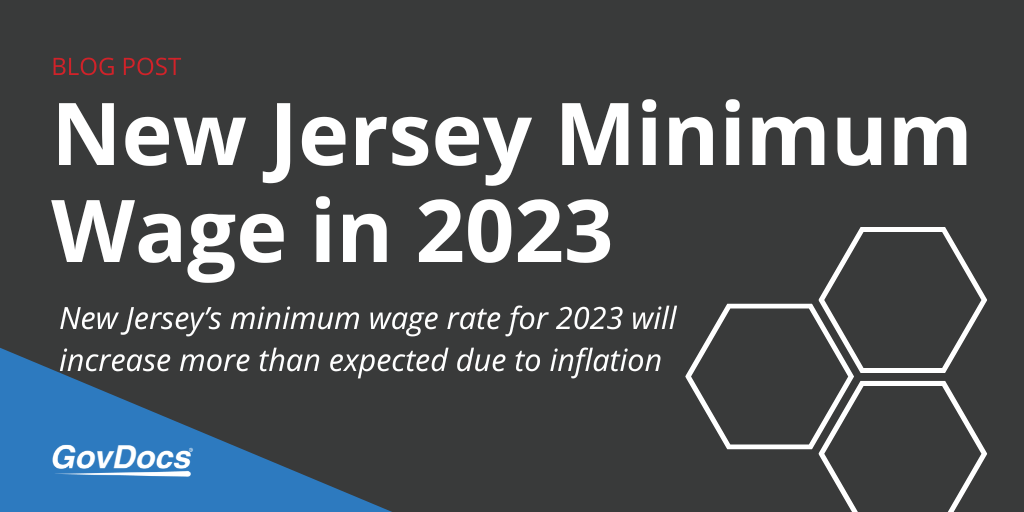 New Jersey minimum wage in 2023 will go up more than initially expected due to significant increases in the Consumer Price Index (CPI).

As was the case recently with California minimum wage, New Jersey’s minimum wage law has a provision that calls for a larger increase due to inflation.

The state’s law, passed in 2019, called for increases of at least $1 each year until reaching the $15 threshold in 2024. But inflation over recent months means it will hit $14.13 in 2023 for employers with five or more workers.

Once the minimum wage in New Jersey reaches $15 per hour, the state Constitution says it will continue to go up annually based on any increase in the CPI.

Meanwhile, minimum wage for tipped employees will increase to $5.26 starting Jan. 1, 2023, with employers able to claim an $8.87 tip credit — an increase in the maximum allowable tip credit of $1. (If the minimum cash wage plus an employee’s tips do not equal at least the state minimum wage, then the employer must pay the employee the difference.)

New Jersey’s minimum wage law also has separate rates for seasonal and small employers. Such businesses were given until 2026 to pay their employees $15 per hour. The minimum hourly wage for these employees will increase to $12.93 on Jan. 1, 2023, up from $11.90.

Also, agricultural workers are guided by a separate minimum wage timetable and were given until 2027 to reach the $15 minimum wage benchmark. Employees who work on a farm for an hourly or piece-rate wage will see their minimum hourly wage increase to $12.01 in 2023, up from $11.05.

“The governor and legislature had the forethought to account for the possibility of rising costs in their historic minimum wage law, which helps low-wage workers better provide for themselves and their families,” New Jersey Labor Commissioner Robert Asaro-Angelo said in a statement. “Every extra dollar in the paychecks of our lowest wage workers is helpful.”

The federal minimum wage hasn’t seen an increase since 2009. In response, the number of states, counties and cities with their own minimum wage laws continues to grow.

Importantly for employers, indexing has become more common as jurisdictions move away from scheduled minimum wage increases. These figures can be released only a few months in advance of the effective date, making minimum wage tracking a difficult challenge for HR and compliance teams.

Looking ahead at the number of jurisdictions with indexed rates in the coming years, minimum wage management will only grow in complexity.

Employers in New Jersey that may have planned for a $14 minimum wage at the start of 2023 should be ready to pay $14.13. Plus, New Jersey minimum wage 2023 has other rates to consider, as well.

The news out of New Jersey highlights the challenges multi-jurisdiction employers face when it comes to minimum wage management. With more cities and states moving to indexed rates of late, the years of scheduled increases with nice round numbers to track are coming to an end.