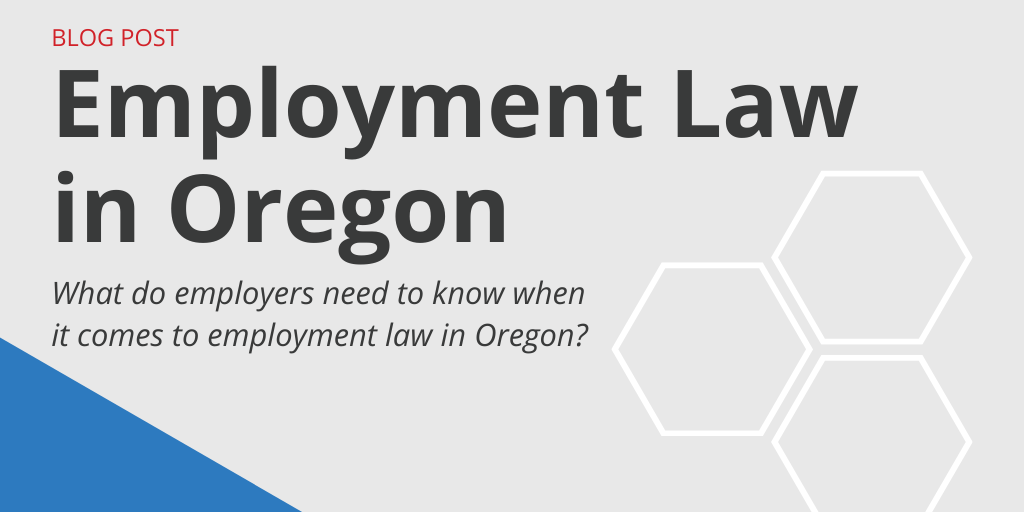 A progressive state, Oregon has long been a pacesetter in terms of employee-friendly legislation.

Oregon employment law is among the most comprehensive in the U.S.

A progressive state, Oregon has long been a pacesetter in terms of employee-friendly legislation. It was the first state to pass a predictive scheduling law, implemented a unique minimum wage law in 2016, and enacted a sick time law that same year.

The political environment in Oregon means companies must closely monitor the state’s employment laws. Below, we will examine some of the major items to consider.

Employers with locations in Oregon know the complexity of the state’s minimum wage.

Oregon is unique in that its rates are tiered based on geographical location, aligning with population density. Minimum wage increases annually on July 1 each year, with scheduled rates until 2023, when it will be indexed.

Also, employers should note that:

Oregon has had a paid sick leave law for some time, and in 2019, the state also passed a family and medical leave law. Below are some of the specifics of each.

Oregon gives all workers in the state sick time. But paid sick time only applies to employers with 10 or more workers; six or more in Portland. In other instances, sick time is unpaid but protected.

Meanwhile, the eligible reasons for use of sick time in Oregon is broad.

Employees can use it to care for their own illness or that of a family member, to care for a newborn or recently adopted or child, or for a foster child in need of care for a disability. Covered reasons also include treatment for health conditions, attending funerals, grieving the death of a family member, domestic violence, harassment, sexual assault or stalking. The law also covers public health emergencies and school closures.

In the summer of 2019, the Oregon governor signed its paid family and medical leave bill into law. It’s considered among the most generous in the nation.

However, payroll deductions to fund the measure don’t begin until Jan. 1, 2022. Employees can begin using benefits in 2023.

The law applies to employers with one or more worker. Employees who make more than $1,000 a year are eligible for up to 12 weeks of paid leave. Eligible reasons for use and the definition of family member closely align with Oregon’s paid sick time law.

As is the case with many paid family and medical leave laws, the benefits formula is complicated. Low-income workers (about $680 a month) receive 100 percent of their wages, with benefits decreasing for employees who earn more.

The amount is tied to an employee’s earnings and the state’s average weekly wage (AWW):

Shifting gears to equal pay, an expansion of Oregon’s equal pay law went into effect at the beginning of 2019.

The law extended sex-based pay discrimination to include 10 protected classes, including:

The law bans paying employees in the above categories less for work of comparable character, which the state defines as having “substantially similar knowledge, skill, effort, responsibility and working conditions in the performance of work, regardless of job description or title.”

Oregon’s equal pay law also prohibits companies from screening job applicants based on salary history and bars employers from asking about salary history from the applicant as well as the individual’s previous employers.

On to predictive scheduling, Oregon in 2017 became the first state in the nation to pass such a law, though smaller jurisdictions had previously enacted similar measures.

It requires retail, hospitality and food businesses with 500 or more employees worldwide to provide work schedules in advance and predictable pay.

Since 2016, employers in Oregon have been prohibited from asking about a job applicant’s criminal history until the job interview.

The law also makes it illegal to use other pre-interview screening tools to disqualify candidates. There are exceptions, however, including jobs that require consideration of criminal history under federal, state or local laws, or jobs involving law enforcement or criminal justice.

These are some of the major employment law matters for businesses to consider in Oregon. Plus, most of these laws also include a related labor law posting, adding another piece to the compliance puzzle.

As is often the case with progressive states, lawmakers will continue to keep companies on their toes when it comes to employee rights and employer requirements.