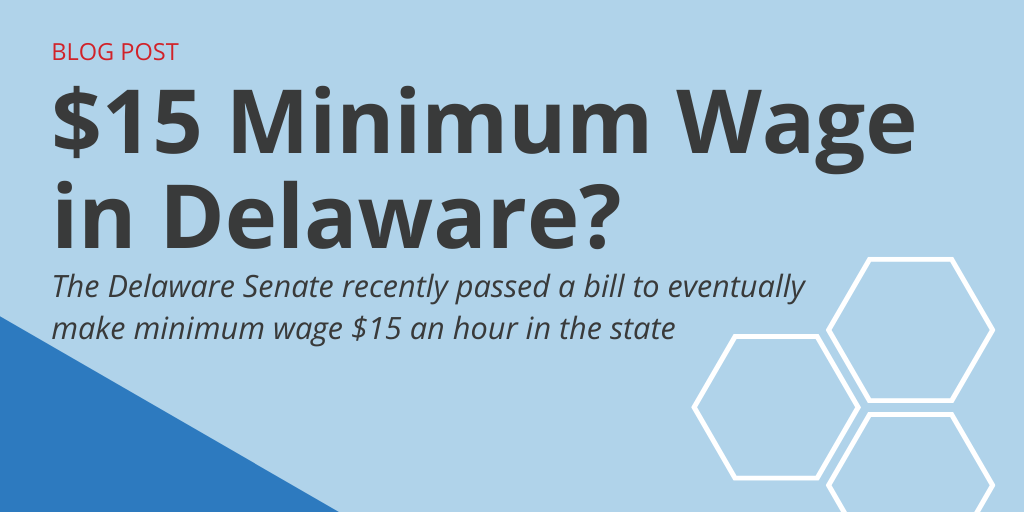 Will there eventually be a $15 minimum wage in Delaware?

The Delaware Senate in late March passed a bill that would eventually bring the state’s minimum wage to $15 an hour.

While many minimum wage laws call for increases based on the Consumer Price Index following scheduled bumps, the proposed bill in Delaware does not. The legislation also does not address minimum wage for tipped employees.

Today, the minimum wage in Delaware is above the federal level of $7.25, which hasn’t increased in more than a decade, despite recent discussions in Washington, D.C.

Since the fall of 2019, the state’s minimum wage has been $9.25. Minimum wage for tipped employees is $2.23. (Delaware also has separate training and youth rates, as well as other exemptions.)

Aside from Pennsylvania, where the governor is calling for a minimum wage increase, Delaware’s neighboring states have rates above $11 an hour.

Despite the Senate’s passage of the bill, it could face a more difficult challenge in the House, where the measure may not have the votes to carry.

Meanwhile, Delaware Gov. John Carney has supported an increase to the state’s minimum wage, but told reporters recently, “The question really is, how do you get there … and how do you get there particularly in the context of the economy, the pandemic economy we find ourselves in?”

A Delaware House of Representatives committee is expected to hold a hearing on the bill in mid-April.

The Fight for $15 has continued to reverberate across the country.

Even as action at the federal level stalled out earlier this year, other jurisdictions have seen bills introduced to raise minimum wage. The majority of states in the U.S. have raised their rates above the federal level, to go along with the dozens of cities and counties that have also done so.

It’s also worth noting that the COVID-19 pandemic has brought more attention to low-wage workers, which has further expanded discussions regarding minimum wage.

Even with the Democrats in control of the House, political observers in Delaware point out that the minimum wage bill may not have the support it needs to pass.

Still, with the Northeast mostly comprised of states with rates well above the federal level, it may be a matter of time before Delaware joins the others.