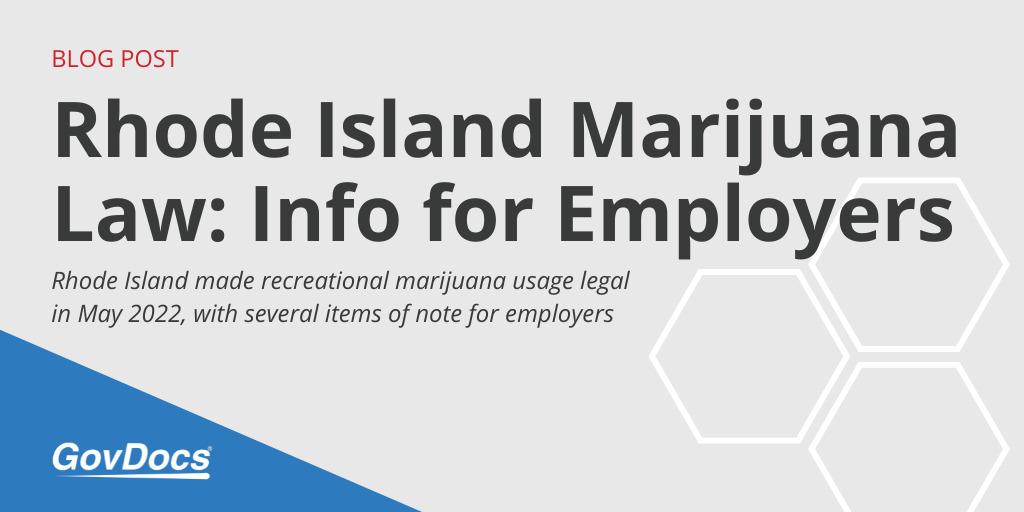 Most notably, the law bars employers from taking adverse actions against employees for off-duty use, though there are exceptions.

Gov. Dan McKee signed the bill into law in late May 2022. Possession and home-grown marijuana is now legal for adults age 21 and older. In-store sales could begin as soon as Dec. 1, 2022.

Most notably, the law bars employers from taking adverse actions against employees for off-duty use, though there are exceptions.

“This bill successfully incorporates our priorities of making sure cannabis legalization is equitable, controlled, and safe,” McKee said in a statement. “In addition, it creates a process for the automatic expungement of past cannabis convictions. My administration’s original legalization plan also included such a provision and I am thrilled that the assembly recognized the importance of this particular issue. The end result is a win for our state both socially and economically.”

The law took effect immediately. Rhode Island is now the 19th state to have legalized cannabis, joining nearby Massachusetts and Connecticut.

While off-the-job use of marijuana is protected for employees in Rhode Island, employers can still prohibit employees from using or possessing the drug at work (including those working from home).

Still, as is the case with most recreational marijuana laws that protect off-duty use, there are several exceptions under Rhode Island law, including:

Meanwhile, for those types of jobs quoted above, employers can bar the use of marijuana in the 24-hour period before a scheduled shift. Such jobs include but are not limited to:

Also, Rhode Island’s marijuana law does not require a showing of on-the-job impairment.

Lastly, the Rhode Island marijuana law includes automatic expungement of some prior civil or criminal marijuana possession charges. It gives courts until July 1, 2024, to automatically expunge past convictions, though those who want their expungement sooner may request it.

Legalized Marijuana Laws in the U.S.

As legalized recreational marijuana continues to grow in jurisdictions across the U.S., employers have more compliance issues to consider.

While medical marijuana users are typically afforded more job protection, some states have passed laws that employers must monitor regarding recreational use:

Employers in Philadelphia and Nevada, where the laws offer more protections for workers, should take extra precautions under their employment laws regarding marijuana use.

There’s also the question of whether employers should even care about employees using marijuana.

As always, employers should remember that marijuana remains illegal under federal law.

Employers with locations in the Ocean State should review their policies and procedures to align with the new law.

Also, Rhode Island’s new marijuana law does include some ambiguity for employers, which be resolved in the courts or through potential guidance from state agencies.