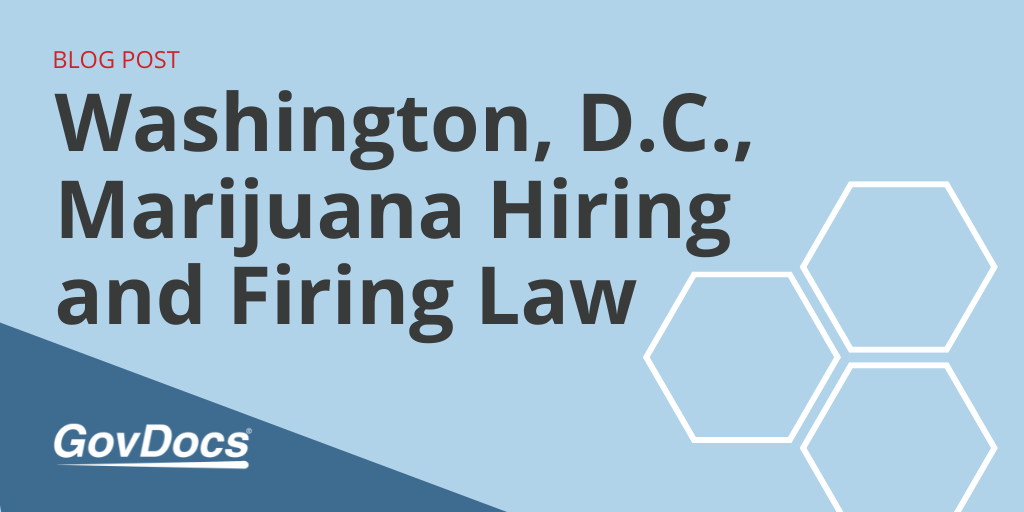 A law that would ban employers from hiring and firing most employees based on a positive marijuana test has been sent to the Washington, D.C., mayor.

Employers in Washington, D.C., may not be able to use a failed marijuana test to refuse to hire, or terminate, an employee under a recently passed ordinance.

Bill 24-109 still requires the mayor’s signature, and other actions, before it becomes law. But the D.C. council unanimously passed the measure, called the Cannabis Employment Protections Amendment Act of 2022. It would apply to both recreational and medical marijuana users.

The law would apply to most situations, except certain types of jobs or if otherwise required by law.

In addition to hiring and firing, the current language in the law includes other actions employers may not take in the case of a positive marijuana test:

Recreational marijuana has been legal in the nation’s capital since 2015.

If the mayor signs the bill, it would become law after a 60-day congressional review and its publication in the District of Columbia Register.

Of course, should the Washington, D.C., marijuana protection law go into effect, there would be several exceptions, notably those professions involving public safety, many healthcare jobs, work involving heavy equipment and if it would be in violation of federal guidelines.

Of course, employers can still ban possession, usage and more at the workplace. And companies may take action against an employee who uses marijuana in the workplace or is high while working.

While Washington, D.C., Mayor Muriel Bowser had yet to sign the bill as of this writing, she has shown her support for the sale of marijuana to adults in the past, introducing the Safe Cannabis Sales Act of 2021 last year.

Meanwhile, should the bill become law, employers would have 60 days to inform employees of their rights and whether those workers would be exempt from the legislation. After that point, employers would be required to provide the same notice each year and for each new hire.

Employers found in violation of the law could face fines up to $5,000, in addition to any lost wages and a complainant’s attorney’s fees.

The growth of legalized recreational marijuana continues to gain steam in jurisdictions across the U.S. And that has created additional compliance issues for employers.

While medical marijuana users are typically afforded more job protection, some states have passed laws that employers must monitor regarding recreational use:

Employers in Philadelphia and Nevada should take extra precautions under their employment laws regarding marijuana use.

There’s also the question of whether employers should even care about employees using marijuana.

Employers in states where recreational marijuana is legal should review their policies, evaluate the applicable laws, and craft a plan for dealing with drug testing and employee use of the drug.

It seems likely the Washington, D.C., marijuana hiring and firing law will go into effect at some point.

Employers with locations in D.C. should review the language and prepare to make the necessary changes, if any, to company procedures.

Ultimately, employers must be aware of new laws, and guidance from government agencies, regarding marijuana and the workplace, appropriate hiring practices and employee rights.