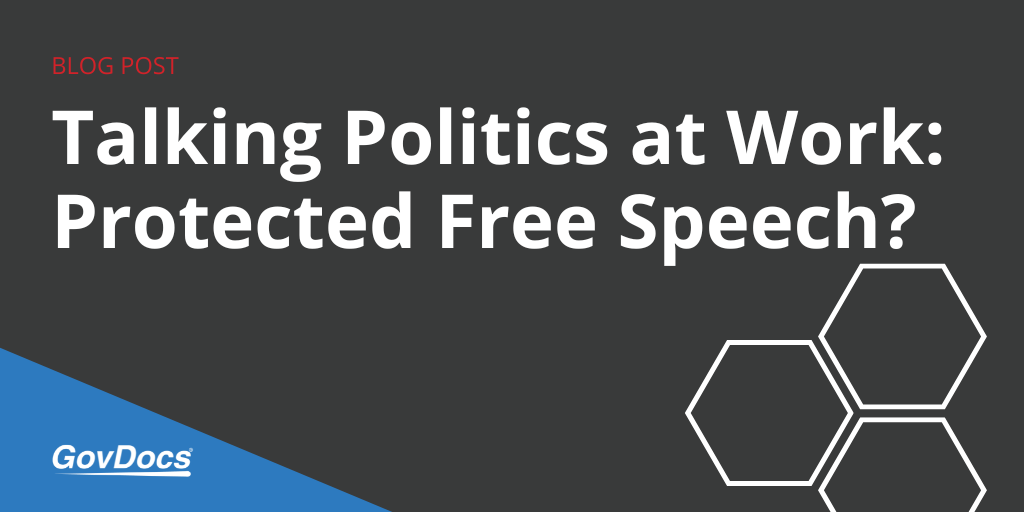 In a presidential election year in America (or any other time, really), political discussions in the workplace can really make the water cooler steam. As an employer, you undoubtedly want your employees to get along and to get their work done, and you certainly don’t want to be accused of violating your employees’ First Amendment rights.

While there are facets of employee communication that are protected — the right of concerted activity, for example, which the National Labor Relations Board (NLRB) is quick to defend — the First Amendment does not guarantee protection in a private place of employment, and that goes for offering political opinions while on the clock.

In fact, the First Amendment is really only about limiting the laws that the federal government can make.

Congress shall make no law respecting an establishment of religion, or prohibiting the free exercise thereof; or abridging the freedom of speech, or of the press; or the right of the people peaceably to assemble, and to petition the Government for a redress of grievances.

Consider the case of John Griffin, Jr., a radiology technician formerly employed by a hospital in New Hampshire. In 2009, after President Obama’s inauguration, Griffin made some comments while on duty in the presence of a hospital patient expressing, let’s say, a lack of confidence in the new administration. Specifically, he mentioned that he was stockpiling weapons and food.

News of these comments soon made their way to his supervisor, and Griffin was terminated for misconduct. After being denied unemployment benefits, he literally made a federal case out of his situation, alleging violations of his rights under the First, Fifth, and 14th Amendments. The U.S. District Court of New Hampshire found that those provisions impose limitations on the conduct of federal agents and state actors, not private citizens.

Elsewhere, Connecticut is an exception. The state’s employment regulations extend First Amendment protections to private employees so long as the employee activity doesn’t interfere with their job performance or the working relationship between the employee and the employer.

In Ricciuti v. Town of Madison, another U.S. District Court said a government employee who brings a First Amendment retaliation claim must show evidence of protected First Amendment activity and subsequent adverse employment action. The ruling noted, however, that:

Not everything public employees say in the workplace constitutes protected speech. Were that the case, government offices would soon cease to function.

In Ricciuti, the U.S. District Court cited the Supreme Court’s decision in Garcetti v. Ceballos, which determined that:

What’s the Difference Between Mandatory and Non-Mandatory Changes? Part...
Scroll to top