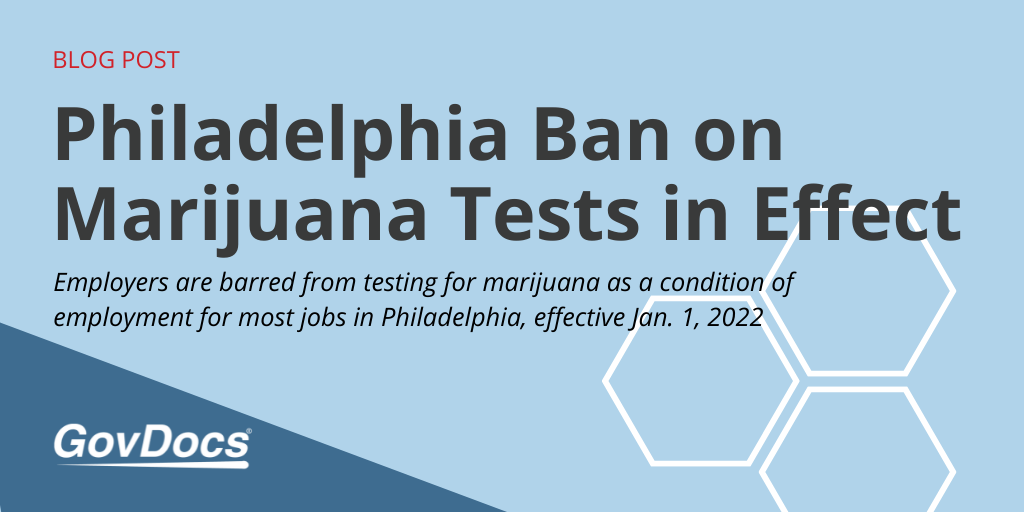 Approved in April 2021, Philadelphia’s Prohibition on Testing for Marijuana as a Condition for Employment is now in effect.

Philadelphia’s ban on marijuana tests is now in effect.

Although recreational marijuana in the city remains illegal, employers are barred from testing for weed as a condition of employment in Philadelphia, effective Jan. 1, 2022.

Recreational use of marijuana is illegal in Pennsylvania, but Philadelphia is one of a few large cities in the state that has decriminalized use.

As always, it’s worth noting that marijuana remains illegal at the federal level.

Approved in April 2021, Philadelphia’s Prohibition on Testing for Marijuana as a Condition for Employment is now in effect.

As is the case with these types of laws, there are several exceptions. First, it does not apply to certain professions:

Meanwhile, Philadelphia’s ban on testing for marijuana also does not cover certain types of employers and situations relating to federal contracts and collective bargaining agreements:

Employers with locations in Philadelphia should review their policies and procedures regarding hiring to comply with the marijuana testing ordinance.

The growth of new recreational marijuana laws in recent years has created additional hurdles for employers.

In Nevada, for example, it is unlawful for employers to refuse to hire someone based on the presence of marijuana in pre-employment drug screenings. (Again, however, there are exceptions for emergency personnel, drivers, etc.)

New York state employers are also not allowed to test employees for marijuana — it was the first state in the U.S. to ban employers from testing both current and prospective employees.

Not only are there pre-employment issues to be aware of, but legalized marijuana likely means more prospective employees are using. That means having to assess whether disqualifying applicants for a positive test is worth it.

Employers that operate in Philadelphia should communicate the new regulation with hiring managers, as well as potentially review overall policies regarding hiring and drug testing.

More Stories From Employment Law News
How Many States Have a $15 Minimum Wage?