Alabama Governor Robert Bentley recently signed a gun bill into law that allows employees to have firearms in their cars at work. The law also protects businesses from being sued for any harm resulting from the use of those weapons on company property. The law takes effect August 1, 2013 and will affect employers with locations in Alabama.

The law allows employers to prohibit its employees from carrying firearms while on company property or while representing a company’s interests in the course of business. The law, however, does not allow employers to restrict transportation or in-vehicle storage of lawfully possessed firearms and ammunition in privately owned vehicles. Any person with a valid concealed-carry permit can transport and store loaded weapons in their vehicles – on or off company parking lots and transportation routes.

Even without a permit, a driver in Alabama is allowed to carry an unloaded weapon, as long as it is not readily accessible. Alabama also recognizes concealed-weapons permits with other states.

Alabama is among nineteen states that have enacted “guns-at-work” or “parking lot” laws that limit employers’ right to restrict firearms on company property. 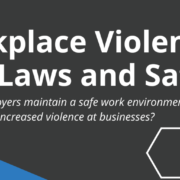