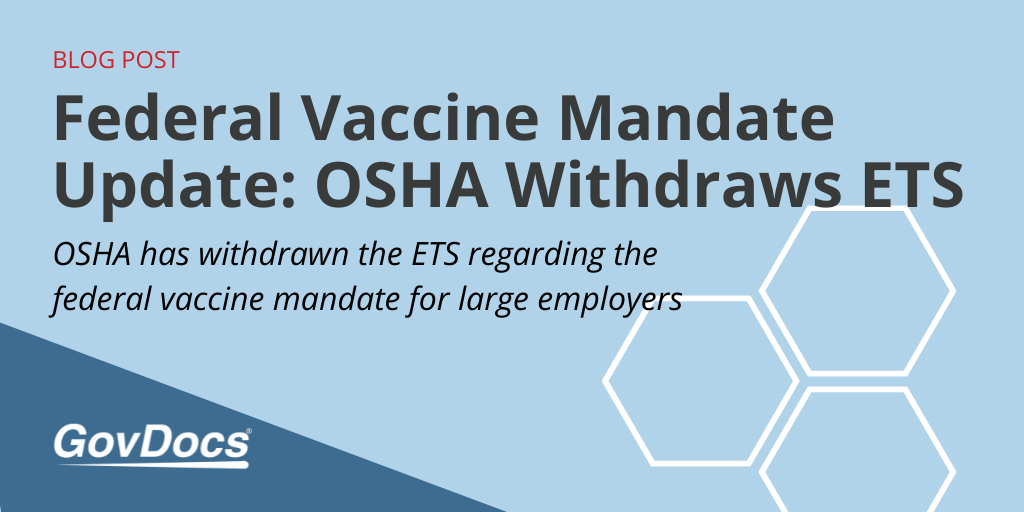 It is notable that the formal announcement from OSHA says it is not withdrawing the ETS as a proposed rule.

A federal vaccine mandate update — the Occupational Safety and Health Administration (OSHA) announced this week that it is withdrawing the emergency temporary standard (ETS).

The announcement comes on the heels of the Jan. 13, 2022, U.S. Supreme Court decision to block the vaccine mandate.

However, the agency did not completely dismiss the possibility of other governmental regulations concerning the COVID-19 pandemic.

Although OSHA is withdrawing the vaccination and testing ETS as an enforceable emergency temporary standard, the agency is not withdrawing the ETS as a proposed rule. The agency is prioritizing its resources to focus on finalizing a permanent COVID-19 Healthcare Standard.

OSHA strongly encourages vaccination of workers against the continuing dangers posed by COVID-19 in the workplace.

Orignially issued in November 2021, the ETS was to require large employers (100 or more workers) to ensure employees are vaccinated, or have workers submit negative tests weekly to enter the workplace. (Unvaccinated employees would have also had to wear a mask at work.)

Almost immediately after the Biden administration announced the mandate, it faced opposition. Arizona brough the first federal vaccine mandate lawsuit in September 2021, and after action in lower courts, the Supreme Court earlier this month eventually sided with a stay of the ETS.

“Although Congress has indisputably given OSHA the power to regulate occupational dangers, it has not given that agency the power to regulate public health more broadly,” the court wrote in an unsigned opinion. “Requiring the vaccination of 84 million Americans, selected simply because they work for employers with more than 100 employees, certainly falls in the latter category.”

While the high court’s decision did direct the Sixth Circuit Court to reconsider the ETS, the latest announcement from OSHA likely means federal officials have recognized defeat on the matter. Plus, some speculate a further push for the ETS and another defeat would hamper OSHA’s ability to enact similar standards in the future.

Still, it is notable that the formal announcement from OSHA says it is not withdrawing the ETS as a proposed rule, which could indicate a different type of approach to combatting COVID-19 (or similar public health emergencies) in the workplace moving forward.

What Now for Employers?

Despite all the recent activity regarding the federal vaccine mandate, there are several other COVID-related laws and regulations to monitor.

Some jurisdictions still have paid leave laws in place for employees to get vaccinated. And there are safety regulations being revised and updated, as was recently the case in California.

Also, many large employers have imposed their own vaccine mandates, which are generally being kept in place despite the ruling from the Supreme Court. But another batch of companies are eliminating mandates in the face of employee pushback and the costs associated with implementing these measures.

Yet again with the pandemic, there a multitude of considerations for employers to deal with as the situation progresses.

The saga of the federal COVID-19 vaccine mandate may have concluded. The hope, of course, is that the less-virulent variant making its way around the U.S. marks the beginning of the end for employer obligations and ill citizens, and a return to normal.

But concern among the population and policymakers could continue to spawn laws and regulations that impact employers.