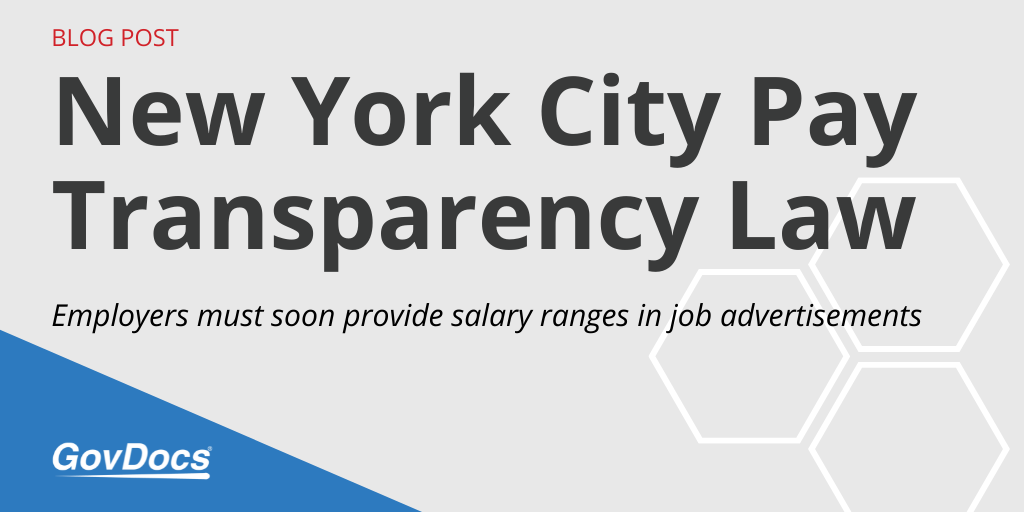 Under the new law, it is considered an “unlawful discriminatory practice” to exclude from job listings the minimum and maximum salary offered for any position located within New York City.

The range for the listed maximum and minimum salary would extend from the lowest salary to the highest salary that the employer in good faith believes it would pay for the advertised job, promotion, or transfer.

The pay transparency law in New York City is reflective of a larger push for salary information to be published along with job listings.

Other jurisdictions that have passed similar legislation. However, the salary information is generally not required as part of the job posting. Instead, employers must provide the range upon request or at the time an offer is made. These jurisdictions include:

New York City’s law is closer to Colorado’s, requiring employers to list salary ranges with initial job postings. It also does not distinguish between internal and external postings; employers must include salary ranges for both.

The city is expected to release further guidance before the effective date, which will be helpful given some of the ambiguity in the language:

The new law in New York City applies to employers with four or more workers in the previous year — that includes part-time and temporary employees, interns and independent contractors.

Temporary staffing firms are exempt from the NYC law, as they already provide such information after interviews in compliance with the New York State Wage Theft Prevention Act.

Interestingly, the law came up as part of a trending discussion on LinkedIn this week.

The digital chatter mostly focused on a recruiter who offered a candidate less than the budgeted amount, because that was what the applicant asked for. But it sparked a larger discussion of pay equity, laws that aim to unveil what companies offer for certain positions, and how job applicants should approach salary negotiations.

The takeaway? More attention to laws regarding pay transparency could be on the horizon, which would add another layer to the complex matrix of employment law compliance.

Employers in New York City should take steps now to ensure compliance with the new law.

There are, of course, other factors to keep in mind, especially for employers that operate across the U.S.:

Employers in NYC should develop a plan for both internal and external job postings ahead of the May 15, 2022, effective date.