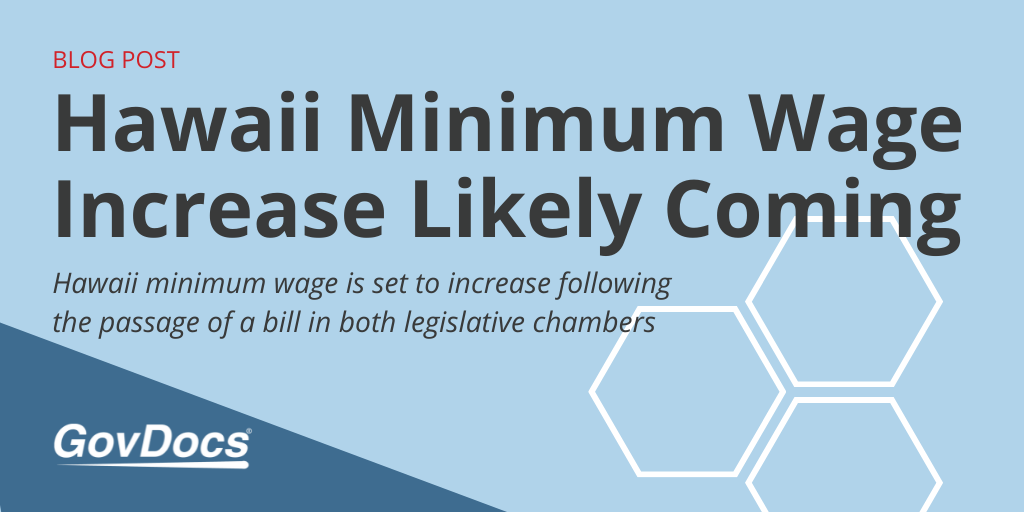 Hawaii minimum wage is poised to increase after lawmakers in both chambers passed a bill in early May 2022 to eventually bring the state’s rate to $18.

House Bill 2510, recently signed by the governor, calls for gradual increases to minimum wage in Hawaii. The state will hit the $18 mark in 2028. Hawaii’s standard minimum wage has been unchanged since 2018.

Under the legislation, the first increase is set for Oct. 1, 2022. The scheduled increases to the standard rate follow a somewhat odd schedule. Most states schedule yearly increases, often $1 at a time. But the Hawaii minimum wage schedule is as follows:

Meanwhile, the law would also increase the tip credit. It is currently 75 cents. The change to the tip credit would be on a different schedule than the standard minimum wage increases in Hawaii, skipping 2026 altogether:

The $18 minimum wage figure in Hawaii is notable. The Fight for $15 prompted many states to enact laws to eventually bring minimum wage to that amount. But so far, only California has a $15 minimum wage (for large employers), though several other states will hit that threshold in the coming years. (Employers should note that there is a ballot proposal to increase California minimum wage to $18 by 2025.)

Still, Hawaii minimum wage having scheduled increases to reach $18 would be the first of its kind. Language in the bill specifically references the economic impacts of COVID-19 and a civic foundation’s finding that there was a 600 percent increase in calls for assistance during the pandemic.

“The legislature acknowledges the economic hardships experienced not only by … households, but also by businesses that employ many of these families,” reads section 1 of the bill. “While increasing the minimum wage will support employees, it will also have an impact on certain businesses, especially during a time of significant economic hardships brought on by government mandates to mitigate the spread of COVID-19. However, the legislature believes that helping working families by increasing the minimum wage is a necessary step to foster economic stability in Hawaii.”

The $18 figure proposed in Hawaii might give employers sticker shock. But by 2028 there could be a handful of jurisdictions approaching that number.

Additionally, many cities have surpassed $15, and indexing — annual increases tied to the Consumer Price Index — could push some jurisdictions closer to $18 by 2028.

And even as many employers have opted to increase minimum wage unilaterally, there continues to be a steady stream of new minimum wage laws enacted at the county and city levels. There has also been minimum wage legislation put forward in the states that follow the federal minimum wage rate of $7.25. For refence, they are:

Despite the geographical similarities in these states, employers should still be vigilant in the potential for new minimum wage laws across the U.S. in the years to come.

Employers with locations in Hawaii should keep an eye out for the passage of the new law. Because the first increase would only be months away, the time for mapping out a strategy to deal with the increase would be short.