In addition to the states with scheduled increases to $15 as hour, other states have indexed rates, which will, however slowly, eventually bring them to the $15 threshold (barring new legislation).

But that won’t be the case for long.

Several states have scheduled minimum wage increases to reach $15 an hour in the coming years. Plus, others have indexed rates, which will, however slowly, eventually bring them to the $15 threshold (barring new legislation).

The information below — updated December 2022 — applies to standard rates for large employers. HR and compliance teams should also be sure to check their locations for applicable county and city rates, which may be higher.

In recent years, a handful of states have passed legislation that will eventually bring their standard rates to $15 an hour.

That $15 figure is important. It represents the nationwide push for higher rates, highlighted by the Fight for $15 movement, as well as employers opting to make it their own minimum wage rate.

The state passed a bill in July 2021 that provides for gradual increases, with the first taking effect at the start of 2022.

Because of the ballot measure, Florida saw its minimum wage increase twice in 2021. Effective Sept. 30, 2022, the standard minimum wage in Florida is $11.

Hawaii recently passed a new minimum wage that will gradually bring its standard rate to $18 in 2028. Hawaii will see gradual increases over the next several years until reaching that figure. (There is a separate rate for tipped employees.)

Maryland was another state that passed a 2019 law to move toward a $15 minimum wage.

It will reach the $15 threshold in 2025, with scheduled increases in the intervening years. Minimum wage in 2023 in Maryland is $13.25 for large employers.

Following a successful 2022 minimum wage ballot measure, we have a new state moving toward a $15 minimum wage.

In Nebraska, voters approved Initiative Measure 433, which amends the state’s minimum wage law and will gradually increase the minimum wage to $15 per hour by 2026.

Nebraska will see a fairly aggressive increase schedule on Jan. 1 each year:

After that point, Nebraska’s minimum wage will be annually adjusted based on the applicable Consumer Price Index.

In New Jersey, minimum wage for large employers reaches $15 in 2024, with indexed rates beginning the next year.

It is another state with scheduled increases in the coming years. In 2023, the minimum wage for large employers in New Jersey is $14.13.

Virginia took the unique action in 2020 to delay a planned minimum wage increase due to the economic impacts of COVID-19.

The states listed above have plans for a $15 minimum wage or have already reached that mark. However, others have passed laws that include annual increases based on the consumer price index. 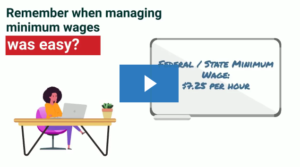 Below are states with indexing requirements, along with their standard minimum wage rate (or rate for large employers) as of July 1, 2022, or Jan. 1, 2023. Note that Oregon is a unique case.

Of course, some states have minimum wage rates above the federal level but without plans to reach the $15 mark — neither through scheduled increases nor indexing.

Those states are listed below, along with their rate as of July 2022 or January 2023. (Note that some have scheduled increases in the coming years, and new legislation could always impact the numbers.)

Lastly, there are a number of states that still go by the federal minimum wage. They are:

Managing minimum wage rates across multiple states is challenging. And that’s not even considering the dozens of cities and counties that have set their own rates in recent years.

And with many states closing in on their final scheduled increases, compliance teams will have to move on to tracking indexed rates.

This blog was originally posted in September 2021. It has been updated with new information.

Philadelphia Ban on Marijuana Tests in Effect
Scroll to top