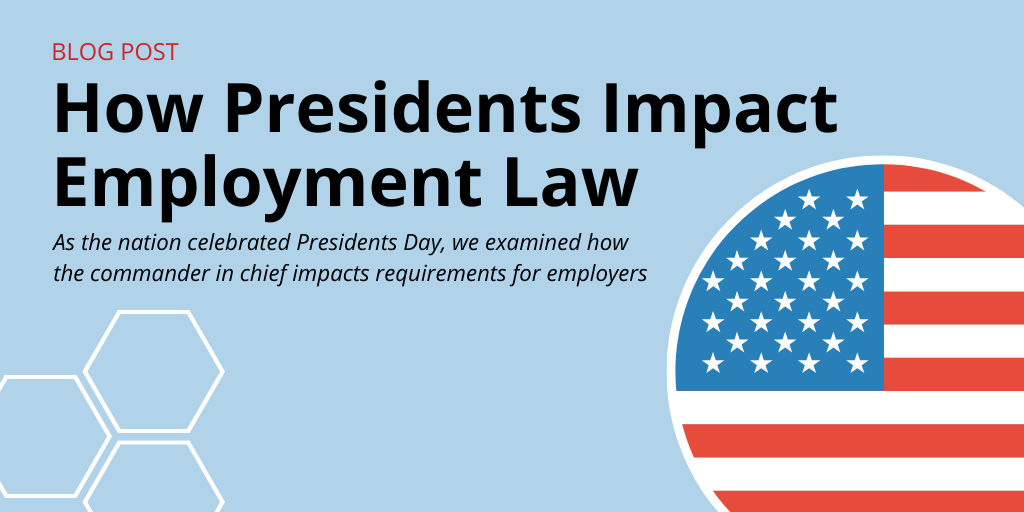 From the Fair Labor Standards Act of 1938 to how the U.S. Department of Labor interprets laws today, the commander in chief can often influence how employers operate.

As many employees across the country took the day off for Presidents Day on Feb. 17, it gave us an opportunity to explore how presidents impact employment law.

From the Fair Labor Standards Act of 1938 to how the U.S. Department of Labor interprets laws today, the commander in chief can often influence how employers operate.

Though the bulk of employment laws we see today are enacted at the state, county and city levels, there are plenty of instances of presidents making changes to employment laws. Here, we’ll take a broad look at employment law over the past several, as well as specific instances of updates under the current administration.

Discussion of employment law in the U.S. generally starts with President Franklin Delano Roosevelt, who presided over the enaction several employment laws. His progressive presidency set the stage for many of the requirements employers face today.

In July 1935, FDR signed into law the National Labor Relations Act, which expanded the reach of labor unions. Three years later, in 1938, he followed up with the Fair Labor Standards Act (FLSA), which established several standards related to workers’ rights.

While efforts to improve working conditions had been underway since the Industrial Revolution, it wasn’t until the passage of the FLSA that the U.S. enacted major changes. It initially set:

The FLSA has evolved in the succeeding years, and today also encompasses labor law posting requirements, overtime regulations and definitions of working hours.

FDR’s administration was also marked by Executive Order 8802, which in 1941 prohibited ethnic or racial discrimination in the defense industry and established the Fair Employment Practice Committee.

Of course, FDR’s many years in office, along with the New Deal, greatly changed the landscape of America, with employment law being no exception.

The next big wave of employment law came a few decades later, during the 1960s, starting with the Equal Pay Act of 1963.

John F. Kennedy, another progressive president, signed the legislation, which amended the FLSA and was aimed at eliminating pay disparity based on sex. A year later, following JFK’s death, President Lyndon B. Johnson signed the Civil Rights Act of 1964, which prohibits employers from discriminating based on race, religion and other factors.

The liberal policies of Kennedy, and those picked up and championed by Johnson, set the tone for the decade and employment law expansion.

Another big change in employment law was the arrival of the Occupational Safety and Health Act, signed by Richard Nixon in 1970 in response to industrial accidents.

Though similar legislation was proposed by the previous administration, Nixon’s support for workplace health and safety regulations have since spawned further requirements for employers. Today, OSHA sets and enforces these standards.

While the U.S. is currently in the longest stretch between minimum wage increases in the nation’s history (more than a decade), there was a span between 1974 and 1991 when the rate increased nine times. It happened under both Republicans and Democrats, though Jimmy Carter’s administration was responsible for four of them:

The federal minimum wage today is $7.25 an hour, having last increased in 2009. However, there are dozens of states, counties and cities that have their own higher rates in recent years and continue to do so.

Moving forward, we come to the Family and Medical Leave Act (FMLA) of 1993, signed into by then-President Bill Clinton.

The FMLA requires employers to provide job-protected unpaid leave to employees under certain circumstances. There are limitations, especially when compared with the paid leave laws currently on the books across the country. The FMLA applies to:

The legislation was a big part of Clinton’s domestic agenda, and opened the door the paid leave laws we see today.

President Donald Trump, elected in 2016, has made several changes to employment law since he took office.

Meanwhile, the overtime pay threshold for exempt workers was increased to $35,568 per year, starting Jan. 1. Here, we see how a president can directly impact employment law. An Obama-era decision to increase that figure to $47,000 was struck down by a federal judge in 2017. The Department of Labor instead went with an amount more in line with the concerns of businesses.

The changes under Trump have also extended to reporting requirements for employers. In August 2017, Trump froze an Obama-era policy requiring large companies to report employee pay by race and gender to the federal government. “We don’t believe it would actually help us gather information about wage and employment discrimination,” Neomi Rao, from the White House’s Office of Information and Regulatory Affairs, told the Wall Street Journal.

Trump has also considered expansions to E-Verify, the federal web-based system used to confirm employees are authorized to work in the U.S., in keeping with his political agenda regarding border control.

Today and the Future of Employment Law

It’s an election year in 2020, which means we could see someone new in the White House, or the continuation of the Trump administration.

No matter what happens this November, the individual sitting in the Oval Office will impact employment law in one way or another. It could be direct action on something like minimum wage — many of the presidential contenders on the left have expressed the need for an increase. Or simply regulatory changes handed down via the DOJ.

As we’ve seen throughout history, the president’s political agenda will impact employment law and how businesses operate.

More Stories From Employment Law News
Romance in the Workplace: What Employers Need to Know

Coronavirus: What Employers Should Know
Scroll to top