Maryland Among Growing Number of States with Hair Discrimination Law 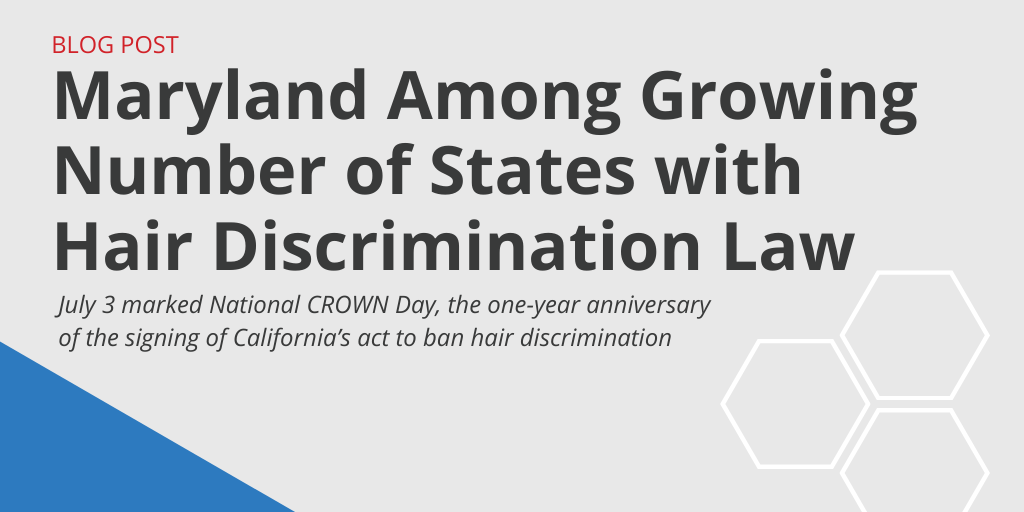 The ban on employment discrimination based on hairstyles in Maryland goes into effect Oct. 1, 2020.

Count Maryland among the growing number of states implementing laws that prohibit discrimination based on hairstyles.

The state in May 2020 amended its Fair Employment Practices Act to cover hair, joining other states — as well as Maryland’s own Montgomery County — that have implemented similar legislation.

Applying to companies with 15 or more employers, the law goes into effect Oct. 1.

Specifically, the new language bars employment discrimination against people with certain types of hair, including:

Employers should review internal policies regarding workplace appearance and grooming to ensure compliance ahead of the Oct. 1 effective date of Maryland’s hair discrimination law.

Hair Discrimination Laws in the U.S.

Since then, other states have passed legislation banning employment discrimination based on hairstyles, including:

According to The Crown Act website, African American women are 1.5 times more likely to be sent home from work due to their hairstyle and 80 percent say they feel the need to change their natural hair to fit in at the office.

Lastly, a similar ordinance in Cincinnati, Ohio, went into effect Jan. 1, 2020, and applies to employers with 10 or more workers within the city. And 20 other states have considered CROWN legislation.

As the nation becomes more cognizant of race-related issues in general, employers should expect more similar laws to pass in the coming months and years.

A viral video of a high school wrestler being forced to cut off his dreadlocks to avoid a forfeit sparked the legislation in New Jersey. Meanwhile, New York State in the spring of 2019 passed legislation banned discrimination based on facial hair and religious attire. And U.S. Sen. Cory Booker introduced a CROWN bill at the federal level in late 2019.

“Discrimination against black hair is discrimination against black people,” Booker said. “Implicit and explicit biases against natural hair are deeply ingrained in workplace norms and society at large. This is a violation of our civil rights, and it happens every day for black people across the country. You need to look no further than Gabrielle Union, who was reportedly fired because her hair was ‘too black’ — a toxic dog-whistle African Americans have had to endure for far too long. No one should be harassed, punished, or fired for the beautiful hairstyles that are true to themselves and their cultural heritage. Our work on this important issue was enhanced by the tireless advocacy of my colleagues in the Congressional Black Caucus, Crown Coalition advocate Adjoa B. Asamoah, and the NAACP Legal Defense and Educational Fund.”

The discussion of racial equity continues to grow across the U.S., and these types of bills will likely continue to be introduced, creating another level of compliance requirements for employers.