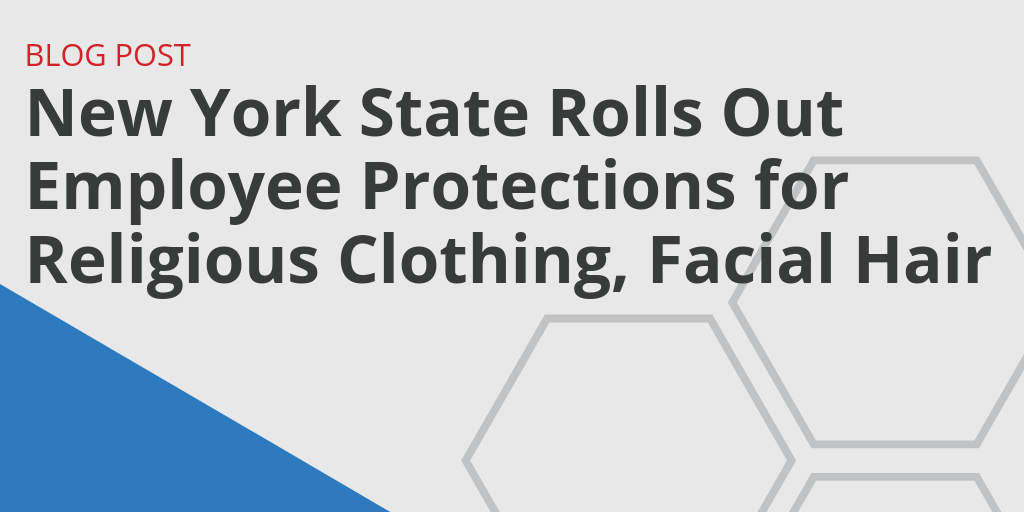 Signed into law Aug. 9, the bill also says employers cannot refuse to hire someone based on facial hair or clothing tied to a religious practice.

New York State in August enacted legislation that bans discrimination against employees based on facial hair, as well as religious attire.

Signed into law Aug. 9, the bill also says employers cannot refuse to hire someone based on facial hair or clothing tied to a religious practice. Language from the New York State Assembly gives an example of potential discrimination:

“(A) member of the Sikh religion, who worked for the MTA, was ordered to remove his turban and wear the MTA hat. When he objected, on religious grounds, the MTA responded that he may wear the turban if he affixes an MTA badge to the front. This was unacceptable as wearing a turban is a solemn religious duty for Sikhs and affixing a badge to it would not be religiously proper.”

There are provisions in the bill that allow employers to forego the protections in cases that would result in undue hardships for the business.

“As New Yorkers we celebrate our diversity and we champion freedom of religious expression in all places, including the workplace,” New York Gov. Andrew Cuomo said. “This law will protect people from discriminatory employment practices based on religious attire or facial hair and makes it crystal clear to anyone who may still have doubts that New York has zero tolerance for bigotry of any kind.”

As is the case with minimum wage and paid leave, jurisdictions continue to enact workplace discrimination laws.

California in July 2019 became the first state in the nation to outlaw discrimination based on hairstyle. Specifically aimed at traditionally black hairstyles, the California legislation mentions afros, braids, twists and locks.

Such laws can include:

These and other measures expand on the complexity of employment law management. Employers should always understand the specific laws and requirements in jurisdictions where they have employees.