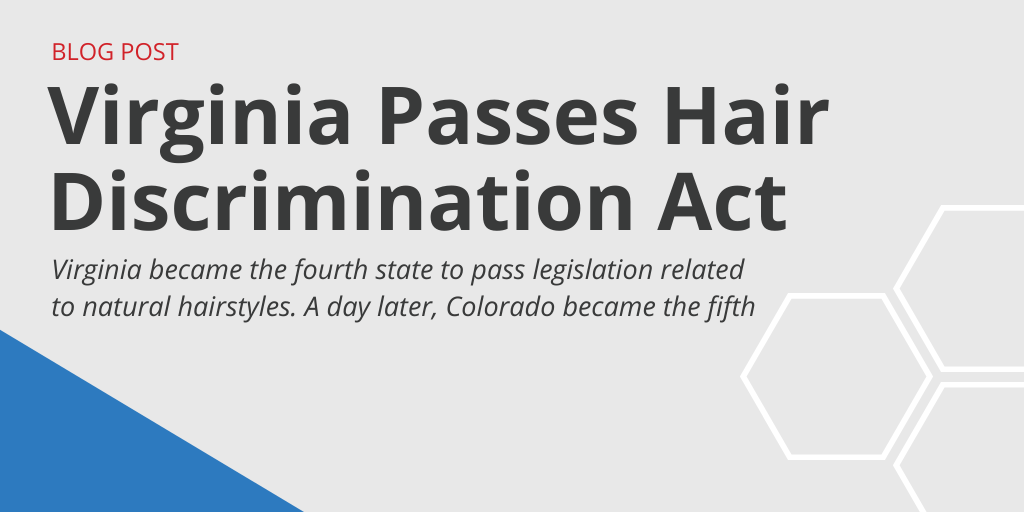 Meanwhile, a day after Virginia passed its bill, Colorado on March 5 enacted its own Create a Respectful and Open World for Natural Hair (CROWN) Act.

Virginia recently became the fourth state to pass legislation that protects people from being discriminated against because of hair, specifically those typically associated with African Americans.

With the bill’s passage, Virginia became the fourth to ban discrimination based on hair, following:

“It’s pretty simple — if we send children home from school because their hair looks a certain way, or otherwise ban certain hairstyles associated with a particular race — that is discrimination,” Northam said in a statement. “This is not only unacceptable and wrong, it is not what we stand for in Virginia. This bill will make our Commonwealth more equitable and welcoming for all.”

Meanwhile, a day after Virginia passed its bill, Colorado on March 5 enacted its own Create a Respectful and Open World for Natural Hair (CROWN) Act. By some estimates, about 20 other states are considering CROWN legislation.

The newly amended legislation in Virginia specifically notes additional protections for “traits historically associated with race, including hair texture, hair type, and protective hairstyles such as braids, locks, and twists.”

What does Virginia’s new law mean for employers? To start, companies should review standards and policies about dress codes and appearances, as well as educating managers about potential bias in hiring and other workplace matters.

Though Virginia’s bill doesn’t specifically address hiring practices, legislation in other states does. California, for example, amended its Fair Employment and Housing Act to include language about hair discrimination.

Also, some smaller jurisdictions — New York City, Cincinnati and Montgomery Country, Md., among them — have passed CROWN ordinances. And legislation has also been introduced at the federal level to amend the U.S. Civil Rights Act.

Employers with locations across the U.S. may consider notifying managers about the possibility that such laws will become more prevalent.

Some of the larger discussion about hair discrimination laws stems from “Hair Love,” an animated short that won the Academy Award in that category. When they accepted the Oscar, producers noted the need for CROWN legislation across the country.

In New Jersey, a high school wrestler was forced to cut off his dreadlocks before a match in December 2018. That state has since passed a hair discrimination bill.

Finally, Dove beauty company has been a major proponent of such legislation over the past few years.

These cultural, news and business items will likely bolster efforts for more CROWN bills in the future. Employers would be wise to consider how the legislation could impact workplace policies.

“A person’s hair is a core part of their identity,” Virginia Delegate Delores McQuinn said. “Nobody deserves to be discriminated against simply due to the hair type they were born with, or the way in which they choose to wear it. The acceptance of one’s self is the key to accepting others.”