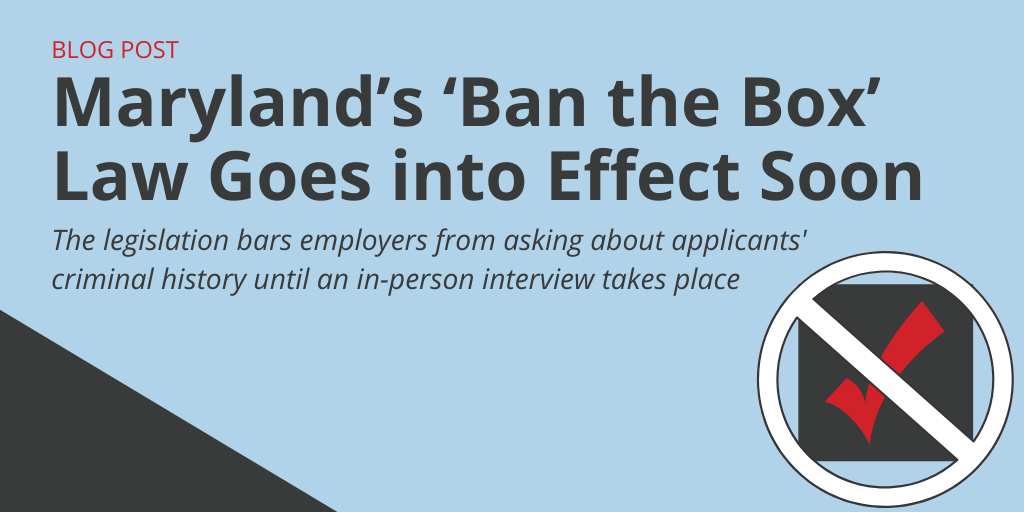 The Maryland Legislature on Jan. 30 overrode a veto from Gov. Larry Hogan to pass the band the box law.

The legislation bars employers from asking about a job applicant’s criminal history before a first-person interview takes place.

For reference, the term “ban the box” refers to a checkbox on some applications where jobseekers indicate whether they have been convicted of a crime. The idea behind such legislation is to open up job opportunities to those who have previously run afoul of the law.

The Maryland Legislature on Jan. 30 overrode a veto from Gov. Larry Hogan to pass the measure.

Ban the Box in Maryland

In passing the bill, Maryland joins a growing number of states and smaller jurisdictions with ban the box legislation. Two counties in Maryland, Montgomery and Prince George’s, already have ban the box laws in place, as does Baltimore.

However, in Maryland employers can still ask the question during the initial face-to-face interview or after that point. Also, the questions employers may ask aren’t limited to a criminal conviction. During or after the initial in-person interview, managers can also ask whether an applicant has ever been accused of a crime.

There are exceptions to the legislation. Employers can ask about an applicant’s criminal past under certain circumstances:

Maryland’s ban the box law also includes penalties for violating employers. After an initial notice of compliance from the state’s commissioner of Labor and Industry stemming from an initial violation, subsequent violations could carry a $300 fine.

Lastly, the law does not preempt the ban the box ordinances in the two Maryland counties and Baltimore.

As of February 2020, 14 states and Washington, D.C., have passed ban the box laws. A handful of cities and counties have also passed similar ordinances.

Most recently, Colorado enacted its ban the box bill in September 2019. There, the law applies to companies with 11 or more employees. It will apply to all businesses in Colorado starting in September 2021.

Ban the Box: What Employers Need to Know

In addition to the nation’s capital, the following states have enacted ban the box legislation:

The momentum of these bills has also shifted how state agencies view violations. In May 2019, the attorney general in Massachusetts announced related fines for three large employers.

“Jobs are the pathway to economic security and building a better life,” Massachusetts Attorney General Maura Healey said in a statement. “But unfortunately, many of our residents with criminal records face barriers to securing employment. These actions are an effort to give all job applicants a fair chance.”

Employers in states with ban the box laws should review their hiring procedures to remain complaint.

Compliance concerns for employers don’t start when a new worker does. Businesses need to be aware of pre-employment laws, from ban the box to marijuana testing.

And those are only laws passed in recent years. Employers must also be wary of potential discrimination based on race, religion, sex, etc., in the application process, as well as when they advertise for open positions.

The U.S. Equal Employment Opportunity Commission has guidance for employers.

Survey: How Do You Manage Paid Leave?
Scroll to top