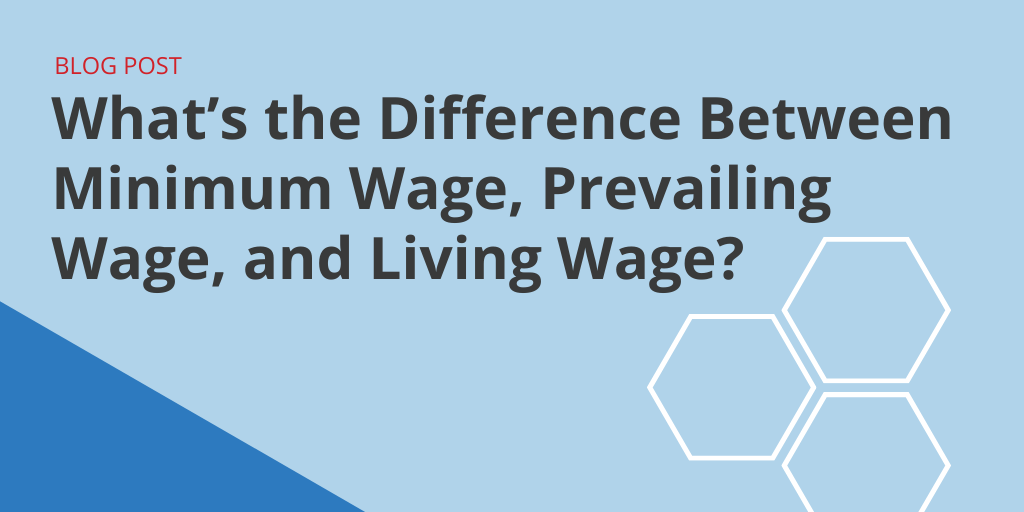 People often use one of three terms when discussing wages: minimum wage, prevailing wage, and living wage. What’s the difference?

People often use one of three terms when discussing wages: minimum wage, prevailing wage, and living wage. What’s the difference?

Minimum wage is the most widely recognized term in the realm of employee compensation. It is the lowest allowable rate of pay at which an employee may sell their work. The concept of minimum wage was developed in the early 20th century to prevent unethical employer practices, such as sweatshops where the wage was disproportionately low compared to the work.

Although New Zealand was the first country to legislate a national minimum wage, nearly 200 other countries and territories have set minimum wages for employees.

In addition to the minimum wage mandated by the U.S. federal government, dozens of other states have their own minimum wage rates – all of which exceed the federal rate.

Employees in the U.S. often wonder which minimum wage applies to them, the state or the federal. According to the U.S. Department of Labor, an employee is entitled to the higher of the two minimum wages.

Prevailing wage typically refers to the rate of pay that contractors and vendors must offer their employees when doing business with a government agency. For example, Los Angeles requires contractors engaged in public works contracts (road construction, for instance) with the city to pay their workers a base level determined by California’s Department of Industrial Relations.

A prevailing wage requirement reduces the ability of vendors to “low ball” their proposed costs for government contracts to the detriment of their workers. One of the key components to the development of the modern prevailing wage was the Davis-Bacon Act of 1931, a federal law which mandated that all laborers, contractors and subcontractors be paid a prevailing wage for all public works projects in excess of $2,000.

Living Wage is the lowest wage at which subsistence needs can be met by an employee.

Because the needs of each employee differ based on marital status, number of children, debt, and other cost-of-living considerations, the term living wage often pushes many hot-button political issues. Living wage can include general benefits, such as health and dental care, and overtime pay.

Legislation and policy conversations surrounding the increase of minimum wage quite often intersect with those of living wage. Proponents of a higher federal minimum wage, for example, argue an increase would help the “working poor” achieve a living wage and reduce the number of full-time workers who rely on government assistance.

Although the terms living wage and minimum wage are often used interchangeably, they remain different from one another. One key difference is that minimum wage is mandated and enforced by legislation whereas living wage is not.

To learn about the living wage in your area, try MIT’s Living Wage Calculator.

The wage an employee earns deals with politics on state and federal levels, worker qualifications, and the financial interests of the employer.

This blog was originally published in 2013.

The #MeToo Movement: Where We Are Today
Scroll to top