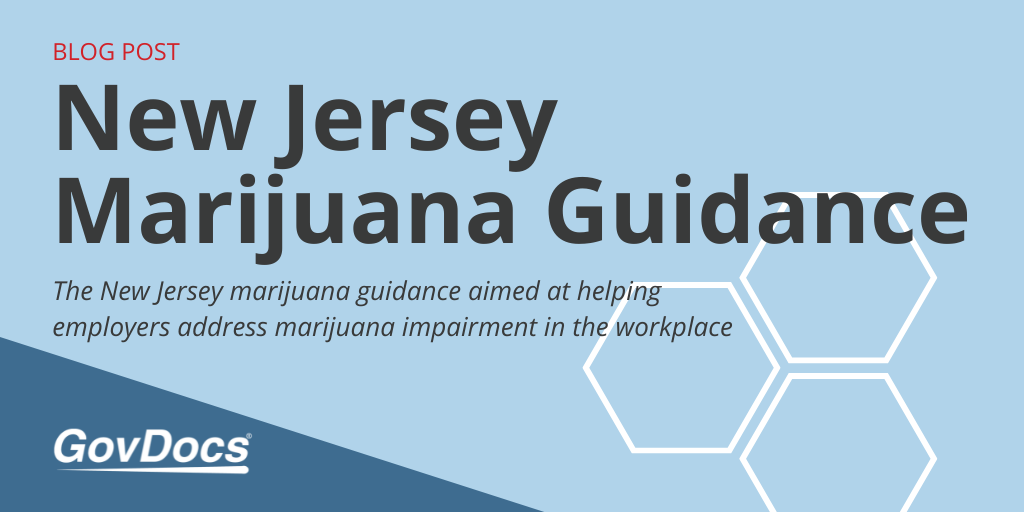 The guidance from the New Jersey Cannabis Regulatory Commission is aimed at helping employers address marijuana impairment in the workplace.

New Jersey marijuana guidance was released by state officials in September 2022, about 19 months after recreational cannabis became legal in the state.

The guidance from the New Jersey Cannabis Regulatory Commission is aimed at helping employers address marijuana impairment in the workplace.

However, while the commission is charged with creating standards for “workplace impairment recognition expert” certification, the latest guidance does not provide those standards. These are still being crafted.

Instead, the guidance from New Jersey officials regarding marijuana in the workplace focuses on:

New Jersey’s marijuana law bars employers from taking adverse employment action based on an employee’s use of marijuana while off duty. But the guidance does provide some information regarding workplace impairment, drug testing and other processes.

As always, it’s worth mentioning that marijuana remains illegal at the federal level.

But a positive drug test combined with signs of workplace impairment may give employers room to act.

Without a formal announcement regarding the workplace impairment recognition expert certification, the commission’s guidance says employers may:

Meanwhile, even when using a reasonable suspicion report — which documents the behavior, physical signs of use and other evidence that an employee is reasonably suspected of being under the influence during work hours — employers in New Jersey should establish a standard operating procedure (SOP), according to the guidance. The SOP for completing the report should include supervisory employees, an interim staff member assigned to such instances or a second manager or supervisor.

A positive test, along with evidence in the report, may be enough to take adverse action against an employee who has violated a drug-free workplace policy.

Also, importantly for employers that operate in New Jersey, the commission’s guidance says:

An employer may use a cognitive impairment test, a scientifically valid, objective, consistently repeatable, standardized automated test of an employee’s impairment, and/or an ocular scan, as physical signs or evidence to establish reasonable suspicion of cannabis use or impairment at work.

The difficulties with employment law guidance regarding legalized marijuana in New Jersey underscores a growing challenge in the world of employment law.

The list of challenges outside traditional employment law issues for employers continues to grow:

And recreational marijuana and employment law protections is no exception.

Recently, California became another state that prohibits employment discrimination based on the use of marijuana while employees are not on duty. California’s marijuana employment discrimination law bars employers from taking adverse action against people in hiring and firing, as well as other terms or conditions of employment, based on the use of weed “off the job and away from the workplace.”

Other states have similar laws, though they are the exception at this point for states that allow adults (21 and older) to use marijuana recreationally.

Between testing, the protection of off-duty use, and more — as we see with New Jersey’s marijuana guidance — recreational cannabis will continue to be an issue for employers now and in the future.

While the New Jersey Cannabis Regulatory Commission has yet to set the standards on the certified workplace impairment recognition expert, the latest guidance helps with interim employees taking a similar role and how employers should proceed.

As always, employers should review their drug testing policies to ensure that their practices are consistent with the new guidance and consult legal counsel for advice.