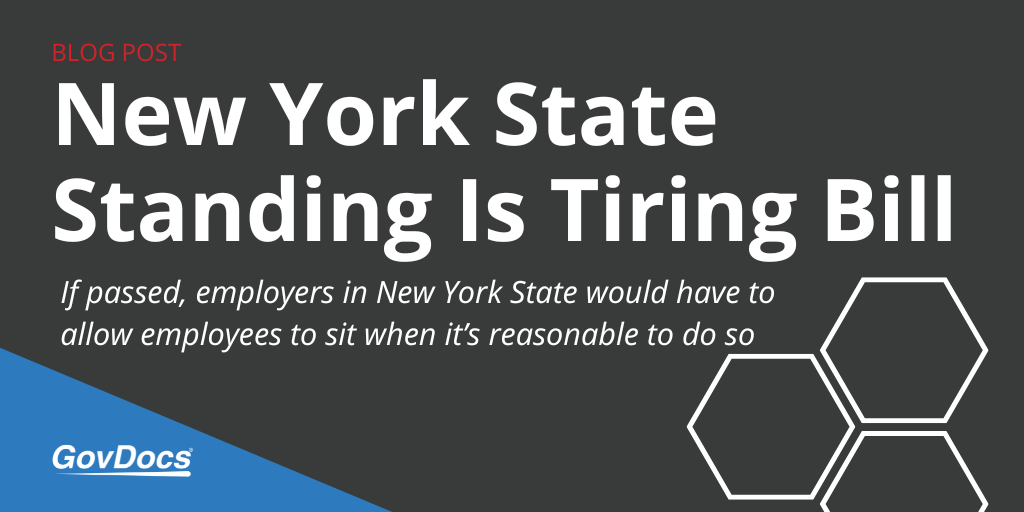 The bill, if passed, would require employers in New York State to allow employees to sit when it’s reasonable to do so.

A New York State “standing is tiring” (SIT) bill has been introduced in the legislature that would require employers to provide seating for workers in certain situations.

If enacted, Senate Bill S7519 would add a new section to state labor law. It is currently in committee.

At a high level, the bill would require employers to provide seats to “all employees where the job reasonably allows seated work” and bar employers from requiring employees to stand when it’s not necessary for the job.

Remember the Seinfeld episode with George and the security guard? At least the show was set in New York.

Somewhat surprisingly, the language in the New York State standing is tiring bill does not outline specific industries. However, the “justification” portion of the bill on the New York Senate website does call out the retail and food service industries.

“Employees in many settings, especially retail and food service, are required to stand for their entire shift,” it reads. “Employers often assert that this is necessary for reasons associated with professionalism, efficiency, and business needs. It is often necessary to stand while performing work, but it is also true that prolonged standing with minimal or no breaks is not a necessity in many workplaces.”

Specifically, the bill would prohibit employers from designing workspaces that require standing when it could be “reasonably designed to permit seated work.” Employers would be required to provide “suitable seats” in certain work environments if the bill should pass.

How Would It Work?

Meanwhile, the New York Department of Labor would be tasked with crafting rules and regulations to determine whether an employer’s workspace could reasonably permit seated work. Considerations under this section include whether:

Also, employees would have the right of action for damages against employers that are not in compliance.

If it passes, the legislation would become law one year after the governor signs it.

Finally, language in the sponsor memo of the bill cites a review from the National Institute for Occupational Safety and Health saying that prolonged standing at work can lead to negative health outcomes, including:

Employment Law Across the U.S.

From new and changing minimum wage rates to the growth of paid leave laws in the U.S., there’s more than ever to monitor. And that includes updated labor law posters, highlighted by the recent new EEOC labor law poster.

Pay transparency laws, protections for employees who use recreational marijuana, hair discrimination laws… the landscape of employment law continues to evolve. Employers that operate across the country should continually research and monitor the state, county and city laws that apply to their locations.

This is a relatively unique piece of legislation. And its future at this point is unclear.

Still, employers with locations in New York State have plenty to keep an eye on, and the state’s standing is tiring bill could be among those items in the future.

What’s the Highest Minimum Wage in 2023?
Scroll to top