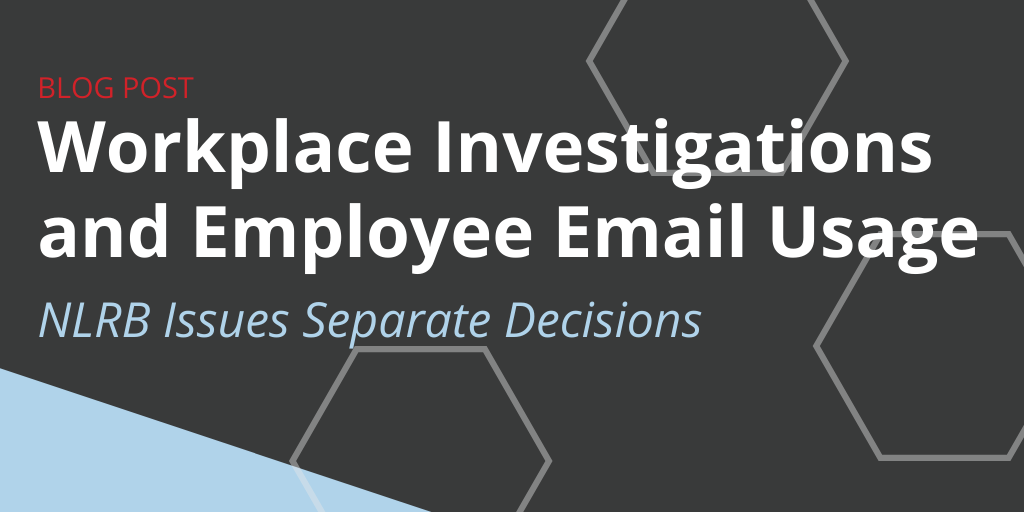 The National Labor Relations Board (NLRB) last month handed down two separate decisions that will impact how employers deal with employees regarding workplace investigations and email usage.

Essentially, the NLRB said the previous decision created an undue burden for employers, who will no longer be required to prove on a case-by-case basis that an investigation’s integrity would be compromised without confidentiality, according to the NLRB.

The case in question involved a thrift store, which told workers to maintain confidentiality about investigations of potential misconduct.

Ultimately, the NLRB decided that “preserving the integrity of an investigation outweighed employee Section 7 rights, contrary to both Supreme Court and Board precedent.”

In overturning the previous decision, the NLRB also noted the new standards are more in line with federal and Equal Employment Opportunity Commission guidance.

Meanwhile, the NLRB on Dec. 17, 2019, also issued a decision that reestablishes an employer’s right to restrict use of company email, so long as the business does so on a nondiscriminatory basis.

The case involved a casino, with the NLRB finding employees generally cannot use the company email system for union purposes. Employees had filed a grievance saying the employee handbook violated an earlier NLRB decision.

Overturning the 2017 decision, the NLRB said workers do not have the right to use company communications software for “non-work-related” discussion.

“Rather, employers have the right to control the use of their equipment, including their email and other IT systems, and they may lawfully exercise that right to restrict the uses to which those systems are put, provided that in doing so, they do not discriminate against union or other protected concerted communications,” according to the NLRB.

However, the NLRB also noted an exception to the decision in situations where company email is the “only reasonable means” for employees to communicate with one another about union issues.

As companies gear up for new 2020 laws, both NLRB decisions could be viewed as victories for employers:

If nothing else, employers should review their internal policies to ensure they match up with federal guidelines.

Bathroom Breaks: Can Employers Monitor Your Time?
Scroll to top