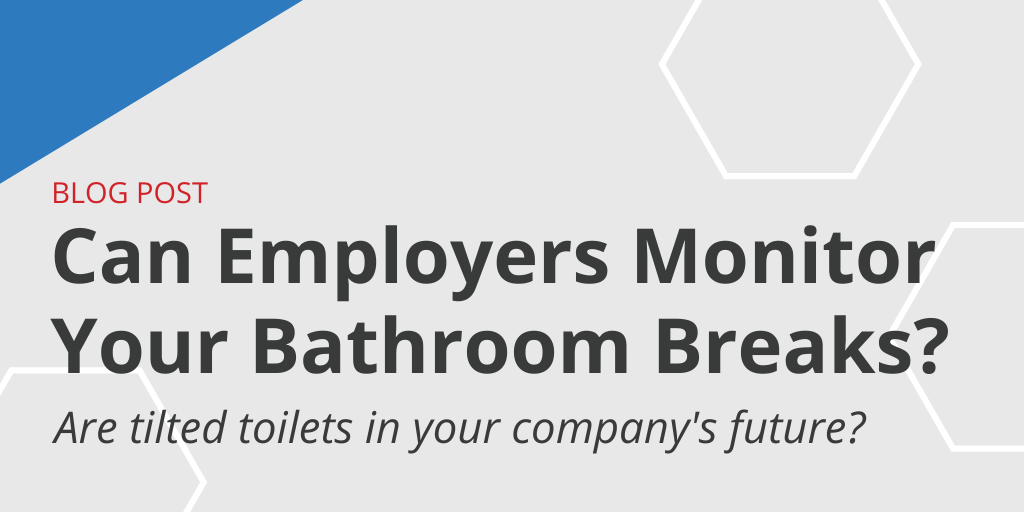 The issue of bathroom breaks at work came up in the news again recently, when a British company developed a toilet that discourages long trips to the john.

In a closely watched 2014 case, a Chicago union filed a complaint with the National Labor Relations Board (NLRB) because its company limited employees’ bathroom breaks to 30 minutes a week, the equivalent of six minutes a day.

The teamsters alleged the company disciplined 19 workers over the policy and managers even offered financial incentives to employees who didn’t use the bathroom at all. The company installed a tracking system that required employees to swipe their ID cards for access into the bathroom.

“(The company’s) philosophy is that they feel like people are getting an extra break in the bathroom,” union representative Nick Kreitman told the Chicago Tribune at the time. “It’s a company that doesn’t grant paid sick leave, so it’s more than a coincidence that (the owner) started to discipline workers after we asked for paid sick leave.”

Eventually, the NLRB opted to defer final judgment so the two parties could resolve the matter through arbitration.

The issue of bathroom breaks at work came up in the news again recently, when a British company developed a toilet that discourages long trips to the john. The toilet slopes downward, making it uncomfortable to sit on for more than five minutes or so at a time.

Meanwhile, a major U.S. employer came under fire last year after a survey of employees said they limit their time in bathrooms for fear of reprisal. And the issue also recently came up in the U.K.

Employers already keep a close eye on the work habits of employees. But the question lingers: Can employers monitor your time in the bathroom?

Legally speaking, employers must pay workers for breaks shorter than 20 minutes, according to the Fair Labor Standards Act.

But in practice, there are two sides to the coin. The Occupational Safety and Health Administration basically says:

Employee complaints of restrictions on toilet facility use should be evaluated on a case-by-case basis to determine whether the restrictions are reasonable. Careful consideration must be given to the nature of the restriction, including the length of time that employees are required to delay bathroom use, and the employer’s explanation for the restriction. In addition, the investigation should examine whether restrictions are general policy or arise only in particular circumstances or with particular supervisors, whether the employer policy recognizes individual medical needs, whether employees have reported adverse health effects, and the frequency with which employees are denied permission to use the toilet facilities.

Note, however, that certain types of jobs — retail, manufacturing, etc. — may require an employee to have his or her station covered during a bathroom break.

Both employees and employers should be reasonable when it comes to bathroom usage.

And if you’re reading this blog in the bathroom… your secret’s safe with us.

This blog was originally posted in August 2014 and has been updated with new information.