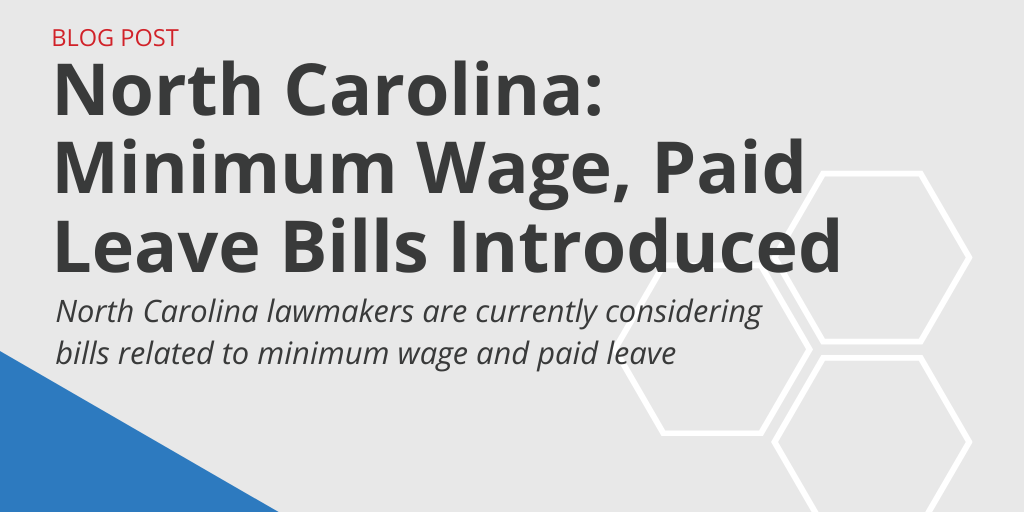 North Carolina employment law has been less active in recent years than many other states.

But lawmakers have been active lately, proposing minimum wage and paid leave legislation.

In this month’s roundup of state-specific employment law, we focus on North Carolina’s potential new laws.

Under proposed legislation, North Carolina would join the states that have plans to reach a $15 minimum wage.

Today, minimum wage in North Carolina is at the federal level of $7.25 and $2.13 for employees who receive tips.

However, the bill calls for more severe jumps in minimum wage than typically seen elsewhere. Often, jurisdictions opt for gradual increases. If the new legislation passes, minimum wage in North Carolina would be:

After that point, increases would be based on the Consumer Price Index.

The bill, if enacted, would also repeal the subminimum wage for certain workers and repeal minimum wage exemptions for agricultural and domestic employees.

Two bills related to paid leave were also recently introduced in North Carolina. The state does not currently have any paid leave laws beyond federal requirements.

Under the proposed North Carolina Paid Family Leave Insurance Act, employees would get up to 12 weeks of paid leave to address their own health concerns as well as caring for a new child, sick family member or to deal with a military issue.

As with many paid family and medical leave laws, benefits would be tied to the employee’s rate of pay and the state average weekly wage.

If passed, it would be effective Jan. 1, 2022, when employees and employers begin paying into the fund. Employees would be eligible for benefits Jan. 1, 2023.

The legislation calls for employees to accrue one hour of sick time for every 30 hours worked. There are separate caps for small and large employers:

Covered reasons for use include:

At a glance, North Carolina has not been on the forefront of passing new employment laws. However, that could be changing with the new legislation introduced earlier this month.

How legislators respond to these proposals could be a harbinger of the future of employment law in North Carolina.

For other state-specific employment law roundups from Employment Law News, check out: