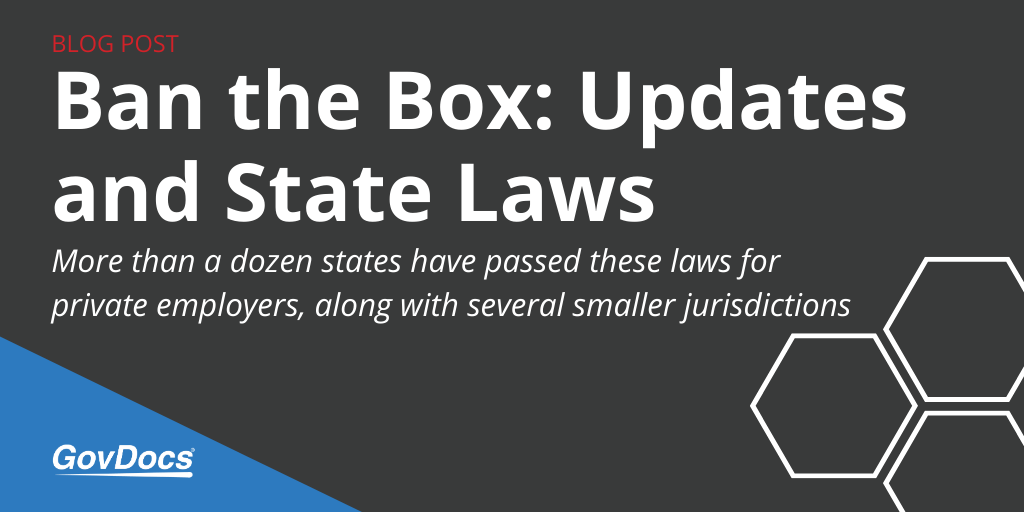 Since the 2010s, ban the box legislation has become more prominent in employment law.

More than a dozen states have passed these laws, along with several smaller jurisdictions. The “box,” in this instance, refers to a section on a job application where prospective employees indicate whether they have previously been convicted of a felony.

The idea behind these laws — sometimes called Fair Chance legislation — is to give those who have run afoul of the law a better chance to earn a job and not have past misdeeds hold them back from employment opportunities.

“Jobs are the pathway to economic security and building a better life,” Massachusetts Attorney General Maura Healey said when she announced fines for ban the box violations there. “But unfortunately, many of our residents with criminal records face barriers to securing employment. These actions are an effort to give all job applicants a fair chance.”

Here, we will provide an update on jurisdictions with new or updated ban the box laws, as well as a rundown of the laws at the state level.

Ban the Box: What is It?

Generally, ban the box laws bar employers from asking about an applicant’s criminal history until a later point during the application or hiring process.

As with most employment law matters, ban the box laws typically require employers to display a related labor law posting. Employers found in violation of these laws can be subject to fines.

While the information below can be used as general guidelines, most ban the box laws include exceptions for certain types of professions — those that require inquiries under other state or federal laws, or jobs that care for minors or vulnerable adults, for example.

As always, employers should review the specific ban the box laws where they have locations to ensure compliance.

While a relatively small number of states have ban the box laws for private employers, dozens of cities and counties have enacted these ordinances, as well as expanded the protections afforded to applicants.

Philadelphia’s ban the box ordinance has been in place since 2015, but it was recently expanded.

Philadelphia’s law bars employers from looking at convictions from seven years ago or more, as well as requiring employers to consider the nature of the conviction and other factors.

New York City in April 2021 expanded its ban the box ordinance to cover existing employees, with the changes going into effect July 28, 2021.

As with other ban the box laws, employers must consider other factors, including the nature of the job and the offense, when considering candidates.

In St. Louis, Mo., employers with 10 or more workers have been subject to a ban the box law since the outset of 2021.

Questions about an applicant’s criminal background must be deferred until after an applicant is deemed qualified for the position.

Several states with ban the box laws have seen updates to the legislation in recent years.

Note: Some states have ban the box legislation that only applies to government jobs. Those are not included in this piece.

California’s ban the box law went into effect in 2018.

It prohibits employers from asking about criminal history before a job offer has been made. It applies to employers with five or more workers.

The law also goes a step further compared to other ban the box laws. Once an offer has been made, an employer cannot rescind it simply because of an applicant’s criminal past. Employers must also consider:

Colorado’s ban the box law went into effect in September 2020.

In addition to not allowing employers to ask on job applications whether an applicant has been convicted of a felony, the law also bans employers from stating in job postings that people with a criminal history cannot apply.

However, the law does not prohibit employers from conducting background checks on applicants.

It applies to companies with 11 or more employees. But it will apply to all employers in Colorado starting September 2021.

Connecticut’s ban the box law went into effect in 2017, barring employers from including questions about a prospective employee’s arrests, criminal charges, or convictions on applications.

Employers can ask during the interview process about an applicant’s criminal history and conduct background checks at that point.

The first state to pass a ban the box law, Hawaii in 2020 updated its law, making felonies from seven years prior and misdemeanors more than five years old irrelevant toward determining if an applicant is qualified. It was previously a 10-year lookback.

The amended law requires employers to use a “rational relationship” test before refusing to hire someone after a background check. Employers can only use prior convictions as a reason for refusal if there is a clear link between the offense and the position.

In Illinois, its ban the box law was recently updated.

The March 2021 update means companies cannot disqualify a job applicant or employee with a record unless there is a “substantial relationship” to the position.

Factors to consider include:

In Massachusetts, the state updated its ban the box law in 2018.

The change had three major components:

Maryland’s ban the box law went into effect in February 2020.

Minnesota’s ban the box law for private employers has been in effect since 2013.

Employers may conduct background checks under the law, though they cannot ask about an applicant’s criminal history until later in the hiring process.

New Jersey is another state that updated its ban the box law in recent years.

It initially went into effect in 2015, but was updated in 2018 to include two new provisions:

New Jersey’s ban the box law applies to businesses with 15 or more employees.

One of the more recent states to have implemented a ban the box law, New Mexico’s went into effect in 2019.

The law does allow employers to disqualify candidates based on criminal history, but state law bans employers from asking applicants for information about criminal records that were sealed or expunged.

Since 2016, employers in Oregon have been banned from asking about a job applicant’s criminal history until the job interview.

However, it also notably makes it illegal to use pre-interview screening tools to disqualify candidates.

Rhode Island’s ban the box law has been in effect since 2014 and applies to employers with four or more workers.

Washington’s ban the box law also includes a provision under which employers may not create policies or practices that exclude people with a criminal record from consideration for a job.

The ban the box law for private employers in Vermont has been in effect since 2017.

While several states and smaller jurisdictions have passed these laws, a federal bill was introduced in March 2021. It would give states time to implement the measure and penalize states that don’t through reduced funding for criminal justice.

Still, without action at the federal level, there are several smaller jurisdictions to monitor. Ban the box laws are among several employment law matters HR and compliance teams must monitor.