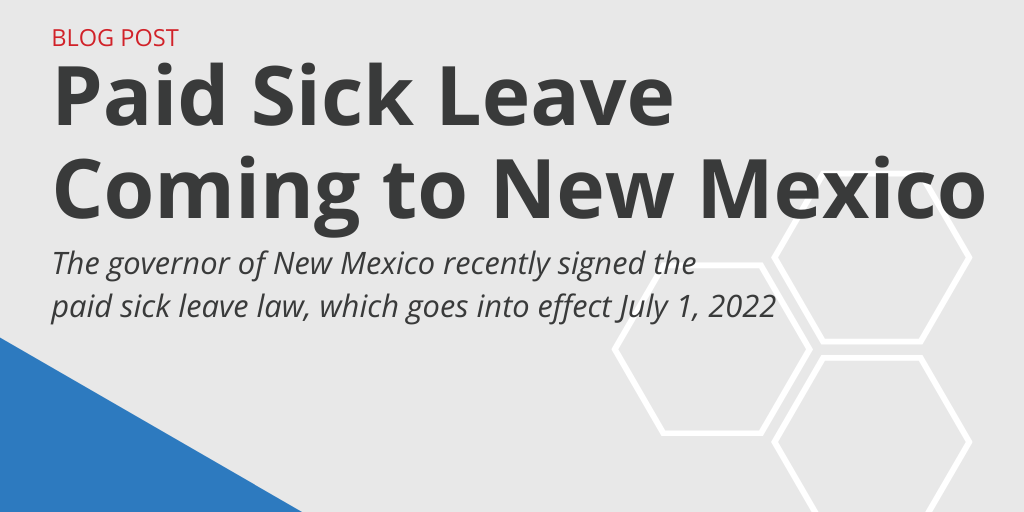 New Mexico paid sick leave is on the horizon.

“No one should ever have to choose between their health and their livelihood,” Gov. Michelle Lujan Grisham said in a tweet on April 9. “It’s clear that access to paid sick leave protects workplaces, families, and communities statewide, and it will benefit New Mexicans across the state.”

The law includes a posting requirement, which must be displayed in Spanish if it is spoken by at least 10 percent of an employer’s workforce.

Like most paid sick leave laws, employees accrue leave as they go — one hour of paid leave for every 30 hours worked, capped at 64 hours a year. Employers can elect to implement a higher accrual rate.

It applies to employers with one or more worker. Below are other specifics of earned sick leave in New Mexico.

Covered Reasons for Use

Covered reasons for use include:

Under carryover, employees can roll over all unused sick time, but they can only use a maximum of 64 hours in a 12-month period.

In addition to the items listed above, other provisions of paid sick leave in New Mexico include:

Paid Leave Laws Across the U.S.

Paid leave laws continue to be introduced and enacted across the U.S.

The influence of the COVID-19 pandemic has put a new spotlight on the need for paid leave. And lawmakers are responding. Indeed, an earlier version of the new paid sick leave law in New Mexico included a provision for public health emergencies.

An increase in paid leave laws was happening before the pandemic struck. Employers will likely have to continue to monitor legislation at the state, county and city level moving forward.