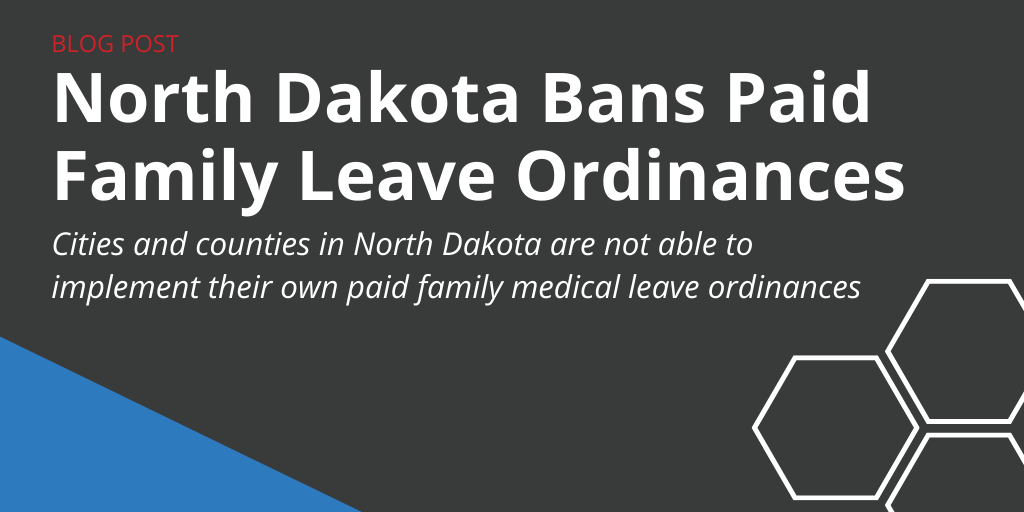 Cities and counties in North Dakota are not able to implement their own paid family medical leave ordinances.

While much of the nation has looked to advance paid leave laws in recent years, North Dakota has gone in a different direction. North Dakota recently banned paid family medical leave ordinances for cities and counties.

The law — enacted last month — bars jurisdictions from creating or enforcing an ordinance that requires an employer to give workers paid family leave beyond federal or state laws.

Notably, the decision came on the heels of lawmakers in North Dakota killing a bill that would have created a study for a state paid family leave program.

North Dakota does not have a paid leave program of any kind.

However, an earlier iteration of a paid family medical leave bill would have created an opt-in program that would have provided employees up to 12 weeks of paid leave to care for a new child or family member while earning two-thirds of their regular rate of pay.

Lastly, the law does not preempt paid parental leave for federal employees, which went into effect in the fall of 2020.

States crafting laws that prevent smaller jurisdictions from creating ordinances regarding items such as paid leave and minimum wage are relatively new.

There was a trend during the middle of the last decade that saw an increase in state preemption laws.

Generally, states with preemption laws are clustered in the South, but there are a handful of others elsewhere. Among the employment law matters some states have opted to preempt:

Still, in progressive states where preemption laws do not exist, jurisdictions have been steadily enacting such legislation.

Despite North Dakota’s decision to remove the right of cities and counties to implement paid family leave laws, there has been a steady increase in the number of jurisdictions with some sort of paid leave program.

From places like California, where several jurisdictions have enacted their own ordinances, to updated and new laws related to the COVID-19 pandemic, employers must continue to monitor the latest laws to remain compliant.

In addition to the sheer number of laws, there are other considerations for large companies: paid leave types, accrual rates, covered reasons for use, extensions of COVID-related paid leave laws, and more.

For employers with locations across the U.S., at least paid family leave in North Dakota is one less thing to worry about.

But the state had considered a paid family leave bill in the past, and the issue could come up again in the future. The constantly changing environment of employment law will continue to keep employers on their toes.