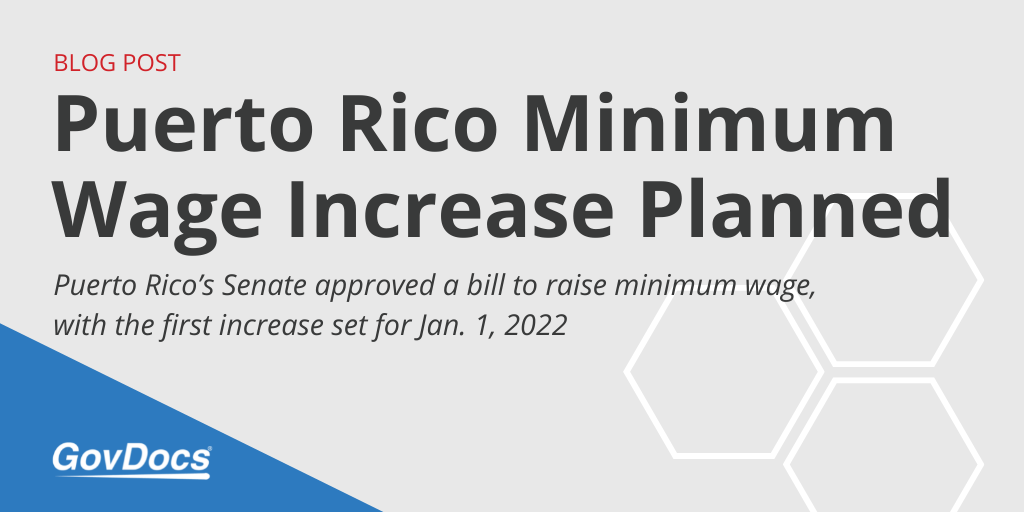 A Puerto Rico minimum wage increase is on the horizon following Senate approval of a bill in the U.S. territory in late August 2021.

The governor has been supportive of the measure and is expected to sign it. The new minimum wage rate would apply to all employers covered by the Fair Labor Standards Act.

Approved by the Senate of Puerto Rico on Aug. 26, 2021, the legislation also proposes the creation of a commission to study and approve future minimum wage increases.

The minimum wage and cost of living in Puerto Rico will be studied annually, with the commission determining whether the minimum wage is adequate to cover the basic living costs of employees. The minimum wage rate would be revisited at least once every two years.

Regarding tipped employee minimum wages, the legislation states “… for workers subject to income from tips, the commission shall establish a basic minimum wage so that this in combination with the tips received is a wage equal to or greater than the minimum wage provided for in the mandatory decrees.”

Puerto Rico uses the U.S. dollar as its currency.

Minimum Wage in the U.S.

As Puerto Rico is poised to increase its minimum wage from the federal level, which has remained unchanged for more than a decade, it highlights the growing number of U.S. jurisdictions setting their own rates.

Several minimum wage increases at the county and city level went into effect July 1, as they do each year, and another round of new rates is already coming up in a few months at the turn of the calendar.

Meanwhile, more states are on track to reach a $15 minimum wage, including Delaware and Rhode Island, where new laws were put into place in 2021.

A number of U.S. employers have operations in Puerto Rico, and companies with locations or employees there should gear up for the likely rate increases in coming years.

Plus, with the establishment of a commission on minimum wage, managing rates in Puerto Rico could be more cumbersome to track moving forward.

FDA Vaccine Approval: The Impact on Employers
Scroll to top